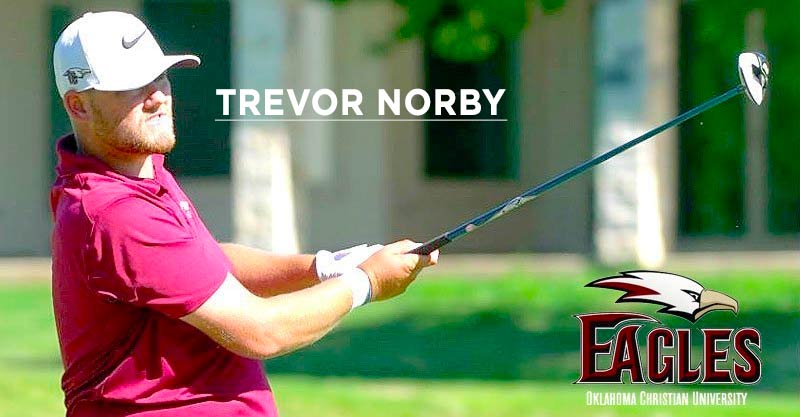 SPEEDWAY, Ind. (Sept. 29, 2020) – Oklahoma Christian and Trevor Norby ended the Brickyard Invitational on Tuesday moving up in the standings.

OC edged up one spot to fifth in the 12-team event, while Norby used a 2-under-par 70 to move up three spots to finish in a tie for fifth in the 71-man field at Brickyard Crossing Golf Course, which is part of the Indianapolis Motor Speedway complex and has four holes located on the track’s infield.

“We didn’t finish as high as we would have liked, but it was an awesome experience to play here,” OC coach David Lynn said.

The Eagles put themselves into a deep hole during Monday’s two rounds, one of which was played in chilly, rainy weather. Playing conditions Tuesday were ideal, with little wind until the latter stages of the round, partly cloudy skies and temperatures rising into the lower 60s as the day progressed.

For most of the round, OC battled Missouri-St. Louis and Tiffin (Ohio) for fourth place. The Eagles briefly moved into a tie with UMSL for fourth, but later dropped back into sixth, where they began the day. Norby had four of his six birdies on the back nine, however, helping the Eagles eventually post a team score of 299 and slide back into fifth with an overall score of 898, five shots behind UMSL but two ahead of Tiffin.

Host Indianapolis (Ind.) took the team title at 853, led by individual medalist Keegan Bronnenberg at 11-under 205. Indianapolis finished 12 shots ahead of the runner-up, Findlay (Ohio) and 16 ahead of third-place Lee (Tenn.).

Norby, a senior from Carlsbad, Calif., strung together birdies at No. 10, No. 11 and No. 12 and nearly holed out from the fairway at No. 16, ending up with a two-foot putt for another birdie. He finished the tournament at 1-under 215, making the all-tournament team.

OC sophomore Alejandro Armijo of Rio Rancho, N.M., recorded four birdies on the 7,180-yard course, helping him overcome a triple bogey on the par-5 No. 15. He finished at 1-over 73 for the round and 5-over 221 for the tournament, tied for 13th.

Playing as an individual, Mateo Pulcini of Rio Cuarto, Argentina, posted his second straight 72 and tied for 19th at 223 (7-over).

The Eagles’ next tournament will be Oct. 12-13, when they will be the only NCAA Division II team competing in the Bubba Barnett Intercollegiate, to be hosted by Division I Arkansas State at RidgePointe Country Club in Jonesboro, Ark. They will finish their abbreviated fall season on Oct. 19-20 closer to home, at the Jerry Hrnciar Invitational at The Territory Golf and Country Club in Duncan, Okla.