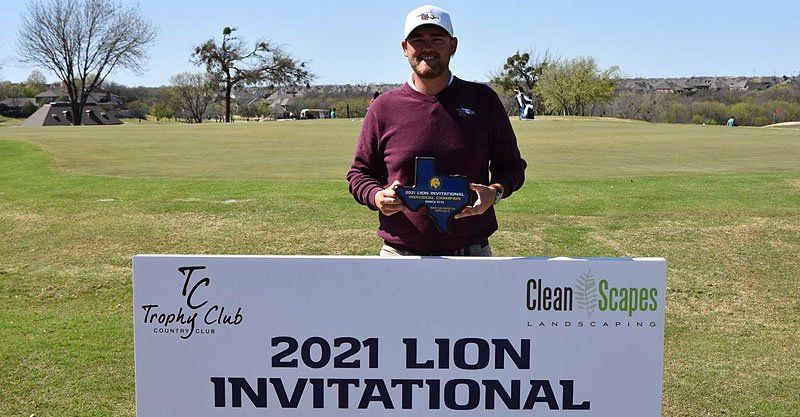 Norby birdied three of his last four holes to secure his fifth career individual win, while the 18th-ranked Eagles played their final hole at 2-under-par to secure a tie for second place with Cameron and Midwestern State in the team race on the final day of the Lion Invitational, hosted by Texas A&M-Commerce at Trophy Club Country Club.

Norby, a senior and two-time NCAA Division II All-American from Carlsbad, Calif., became the fifth player in OC’s men’s golf history to win as many as five tournaments, joining two OC Athletic Hall of Famers (Bruno Buccolo with 10, Juan Lizarralde with nine), a future Hall of Famer (Sam Johnston with seven) and a current teammate (Andres Brictson with five).

At 6-under 138 for the two-round tournament, Norby finished one shot ahead of two Lone Star Conference rivals, Jake Doggett of Midwestern State (Texas) and Parker Holekamp of Texas A&M International, who bogeyed his final hole, the par-5 No. 10.

OC posted a team score of 286 (2-under-par) – the best of the day by any of the tournament’s 16 teams – and closed with a two-round total of 577. That proved good for a tie with LSC rivals Midwestern State and Cameron, just one shot behind the team winner, Hutchinson (Kan.) Community College. Host Texas A&M-Commerce was fifth at 581, while first-round leader TAMIU fell to sixth at 584. The only other ranked team in the field, No. 15 Dallas Baptist (Texas), finished seventh at 589.

OC junior Alex Motes of Sulphur Springs, Texas, shot a final-round 79 and tied for 60th at 155.

After playing three tournaments in as many weeks, the Eagles won’t compete again until April 5-6, when they’re scheduled to be in Denton, Texas, to play in the Dallas Baptist Patriot Classic at Wildhorse Golf Club at Robson Ranch. That will be OC’s final regular-season tournament before the LSC Championship event, set for April 19-21 at Tierra Verde Golf Club in Arlington, Texas.

Cameron moved up two spots Tuesday to earn its tie for second.

The Aggies shot a solid 290 in the first round of the 2021 invite hosted by Texas A&M-Commerce on Monday. After lightening shortened the previously schedule 54-hole event, CU upped their game in the final round, shooting a 287 to finish in a tie for second place with a total score of 577, just one stroke back of the tournament champion Hutchinson CC.

Tyler Kaman led the final round surge, shooting a 67 in the final round to give him a 141 total score, good for fifth place individually. Kaman recorded six under-par holes during Tuesday’s round, with just one bogey on the scorecard. The junior had the second best par-4 score (2-under) of the field and totaled the third most birdies with nine through 36-holes of play.

Freshman Tobias Andersen, who was in the top-5 after a first round 69 on Monday, finished in 12th after shooting a 75 during the second round to give him a solid 144 for the tournament. Devin Whipple had CU’s second under-par round on Tuesday, shooting a 71 to give him a 147 for the Lion Invite.

Preston Holmes finished one stroke back of Whipple with a 148 after shooting 76 in the final round, while Joey Kirkcarded a 74 on Tuesday and finished with a score of 149. All five Aggies finished in the top-30 individually.

As a team Cameron led the field with a 14-under score on the par-5 holes and was second with 35 combined birdies. Kirk and Andersen both had seven birdies for the tournament while Holmes and Whipple each had six under-par holes for the Aggies. Whipple and Andersen were also both at the top of the leaderboard in made pars with 24 each during the 36-hole event.

Hutchinson, who also shot 287 during the final round, finished just one stroke ahead of the trio of Cameron, Oklahoma Christian, and Midwestern State. The host school A&M-Commerce moved up two spots in the final round as well to finish in fifth place as a team.

Rogers State men’s golf team wrapped up the 2021 Lion Invitational with an eighth-place finish. RSU began the day in a three-way tie for ninth and climbed one spot to take eighth overall in the 16-team field after improving four shots on their day one score (298), finishing with a 294.

Freshman Elliot-Han Montermal and junior Luke Palmowski led the way for the Hillcats, as the duo both shot rounds of 73 (+10 on the day.

Palmowski, who started the day in the lead, shot 4-over in the first four holes, but recovered to shoot 3-under the rest of the way with three birdies and 11 pars on the final 14 holes. Palmowski finished at -4 for the tournament, ending up two strokes behind Norby.

Montermal finished with four birdies on the day. He climbed from a tie for 56th to begin the day into a tie for 37th, shooting a 150 (+6) over the two days.

Ty Nicar and Aidan Gavey each shot 74 in the final round to finish with a two-day total of 151 and in a tie for 47th.

The Hillcats will now set their sights on the Central Region Preview next week in Kansas City, Missouri. The event will take place March 29-30 at the Shoal Creek Golf Course.