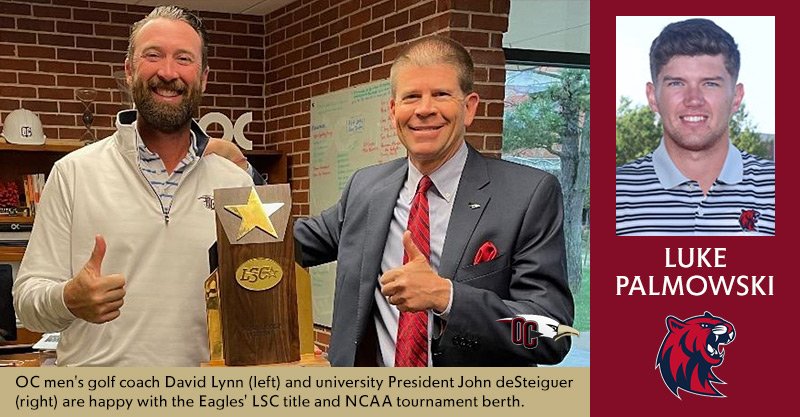 INDIANAPOLIS (April 23, 2021) – Oklahoma Christian will be the No. 1 seed out of the South Central Region for the NCAA Division II South Central-West Super Regional, the NCAA announced Friday.

The Eagles will join 15 other teams and six individuals at the tournament, which will begin May 6-8 at The Home Course in DuPont, Wash., near Seattle. The Super Regional is the first step of the Division II postseason.

“Qualifying for the postseason is at the top of our list every season,” OC coach David Lynn said. “Our guys have worked very hard for this since March of 2020 when COVID-19 hit and canceled our season. We cannot wait to get to Seattle and try to win a regional championship.”

The top four teams from each of four Super Regionals, and the top individual not with a team from each Super Regional, will advance to the NCAA Division II Championship tournament, set for May 17-21 at The Champion Course at PGA National Resort in Palm Beach Gardens, Fla.

OC last qualified for the national event in 2016. The Eagles qualified for the Super Regional that year and also in 2018 and 2019. Last year’s NCAA golf postseason was cancelled due to the COVID-19 pandemic, but it’s likely the Eagles would have made the field, as they were ranked No. 1 in the South Central Region when the season ended.

This season, the Eagles have won five tournaments, finished second in two others and posted an 83-5-2 record against Division II competition. Only one Division II team (Central Missouri) has beaten the Eagles since the start of October.

Rogers State junior Luke Palmowski was selected as an individual to compete at the 2021 NCAA Central/Midwest Super Regional Championships to be held at Shoal Creek Golf Club in Kansas City, Missouri on May 6-8, announced the NCAA on Friday.

Palmowski is one of three individuals selected from the central region, whose team did not receive selection for the event, along with a pair of golfers from Southern Arkansas.

The Rotherham, England native is coming off of an individual title in the 2021 MIAA Men’s Golf Championships on Monday and Tuesday, after winning the event by seven shots at the Shangri La Resort.

Palmowski has won two-straight events to enter the NCAA postseason, as he also won the NSU Golf Classic in the final tournament of the regular season.

At the Central/Midwest Regional Preview at Shoal Creek earlier this season, Palmoswki finished seventh overall in a 36-hole event, shooting +4 in an event that featured a wind chill of 36 degrees and northwesterly winds of 20 mph with gusts in the 30s.