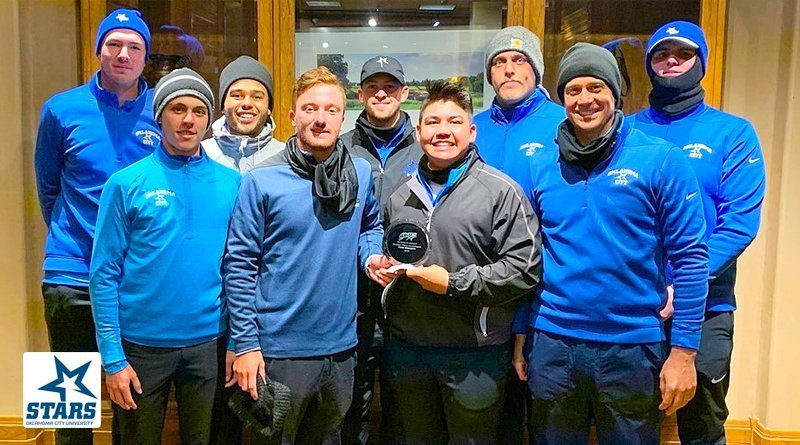 OKLAHOMA CITY – Oklahoma City University gutted out the win in the Southern Plains Intercollegiate on Tuesday at Gaillardia Country Club.

Oklahoma City, ranked 12th in NAIA men’s golf, took its second victory of the fall. The Stars prevailed by 29 shots over No. 3-ranked Texas Wesleyan.

“It is always nice to win at home,” OCU coach Andy Crabtree said. “The team showed a lot of grit this week fighting through very difficult conditions. I am very proud of their effort.”

David Meyers led the Stars with a third-place finish. Riley Casey of Oklahoma and Ferdinand Muller from Oklahoma State, playing as individuals, ended tied at 4-under par after 54 holes. Muller captured the title by winning the playoff. Muller made par on No. 10 to settle the individual crown.

Meyers, a senior from Johannesburg, South Africa, delivered a 71-70-72–213 to finish one shot out of the playoff and two strokes ahead of Oklahoma State’s Rasmus Neergaard-Petersen. Meyers buried 14 birdies. Meyers led the tournament in par-3 and par-4 scoring.

The Stars concluded the fall schedule and will look forward to resuming play in the spring. OCU hosts the Champions Cup on Nov. 4 at Gaillardia Country Club to raise funds for the program.