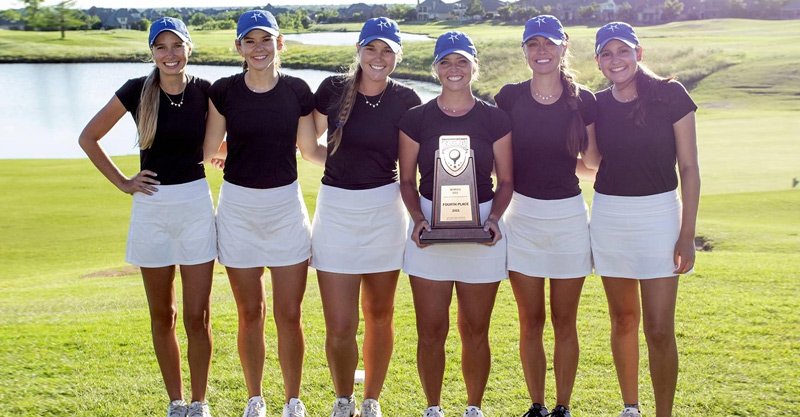 The 17th-rated Stars turned in a 294-303-309-305–1,211 to tie for fourth with Dalton State (Ga.), who entered the tournament at No. 1 in the nation. Ponca City’s Sydney Hermann led Dalton State by finishing 12th in the event. Oklahoma City’s Natalie Gough earned all-tournament honors with her ninth-place showing.

“In my 11 years at OCU, I have never been so proud of a team,” OCU coach Marty McCauley said. “We’ve been through the adversity of COVID and playing this season under the restrictions we had. We as a group have struggled most of the year. Despite that, they put up the results we knew we were capable of. The love they have for one another is what defined our play this week.”

Gough, a junior from Bixby, delivered a 75-74-73-73–295 to finish eight shots behind individual national champion Gracie Parrott of Campbellsville (Ky.). Gough sank three birdies on the par-72, 5,839-yard course to bring her weekly total to nine birdies. She had back-to-back birdies on Nos. 14 and 15.

Two Stars finished among the top 20 and three OCU golfers were in the top 25. McKenzie McCoy supplied a tie for 20th place with a 73-75-76-76–300. McCoy, a senior from Beggs, Okla., knocked in three birdies during the last round to finish with 13 for the tournament.

OCU’s Lauren Behnken, a junior from Tulsa, Okla., put together a 71-81-81-82–315 with two birdies in the last round. Clair Hill, a senior from Gig Harbor, Wash., shot an 81-82–163 after subbing in for Arianna Medina, who played the first two rounds for the Stars. Medina, a senior from Phoenix, gained recognition from the NAIA as a character act award winner.

The rainy weather stopped play Thursday afternoon during the third round. After the round was suspended, nearly six inches of rain accumulated at the course. Golfers played as many as seven holes to complete the third round before moving on to the final round Friday. Course staff adjusted the course for the last round as golfers cleared each hole after finishing their third round.

“They’ve been through so much adversity it didn’t bother them,” McCauley said of his team’s response to the difficulties brought on by the weather. “They’ve been used to that adversity. They handled it with great character. They all live together. We spend time together. It’s a close group. That’s what good programs are built on, and this team will forever will be one of my favorites because of the respect they treated each other with.”

Second-ranked Keiser (Fla.) grabbed its third national championship by 19 shots over Taylor (Ind.). Keiser was the national runner-up in the 2019 national tournament, which took place at Lincoln Park Golf Course in Oklahoma City.

Parrott was the leader in the clubhouse after being part of the first group of the day to turn in their scores. Parrott overcame a two-stroke deficit after three rounds to secure the national title.

Rose Creek Golf Club hosted the NAIA Championships on a month’s notice. The NAIA moved the tournament to Rose Creek after being originally scheduled to be at Eagle Crest Golf Club in Ypsilanti, Mich.

“It was absolutely phenomenal,” McCauley said. “They had five weeks to prepare. They were accommodating. With six inches of rain we got last night, they had to prepare the course so we could finish the tournament, it was hands down, the best it could be.

“I want to thank all the staff at OCU who stepped up including all of our coaches who were out there. I’m very appreciative. We were put in a pinch, and it was amazing. It shows how special OCU is.”