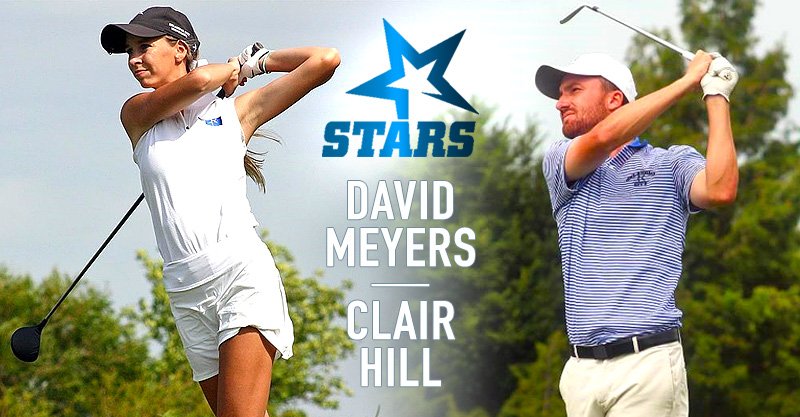 Meyers, a senior from Johannesburg, South Africa, produced an 11-under-par score. The Stars tied for second place through 36 holes.

Meyers delivered a 64-69–133 and 12 birdies Monday. Meyers buried five birdies among his first seven holes on the way to a 31-33–64 in his first 18 holes. Meyers played bogey-free until his 33rd hole of the day on No. 15 to build a nine-shot advantage. Meyers seeks his sixth career victory and ninth consecutive top-five finish. He owns 23 career rounds shooting under 70.

OCU’s Bosten Benn notched a 74-70–144 with four birdies to tie for third. Benn, a freshman from Edmond, Okla., made par through his first nine holes. Benn had two bogeys and a double bogey Monday.

The Stars’ Mason Mikeska and Ben Thionnet tied for 23rd through two rounds. Mikeska, a junior from Waco, Texas, turned in a 79-74–153 with five birdies. Thionnet, a freshman from Edmond, Okla., carded a 77-76–153 while making three birdies.

Oklahoma City golfers occupied the top four spots on the individual leaderboard. The Stars’ Clair Hill  held a two-shot lead on teammate Arianna Medina with another 18 holes to come Tuesday.

Peyton Timmerman of Southwestern College nailed a hole-in-one on the par-3 ninth hole. Timmerman made her ace from 149 yards out using her 8-iron.

The last round of the tournament starts 8 a.m. Tuesday. The Stars take their first shots 9:40 a.m. Tuesday off the No. 1 tee.