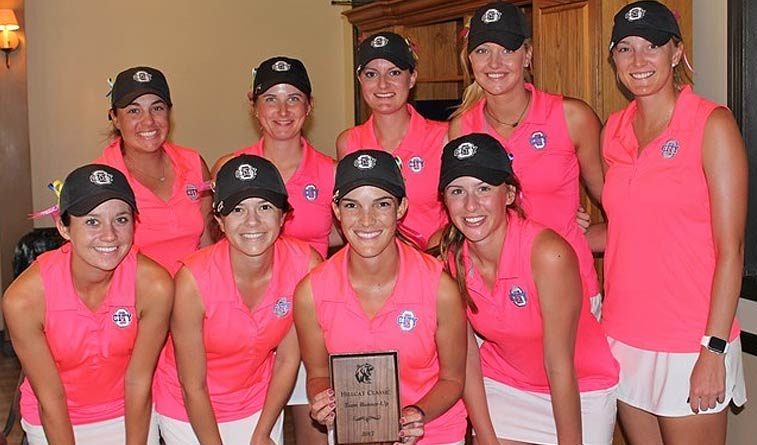 Above: OCU picked up its first runner-up finish of the season.

The Stars finished 15 strokes behind team champion St. Edward’s (Texas). Moody, a junior from Aledo, Texas, delivered a 73-74-77–224 to finish four shots off the pace set by Ana Sofia Benavides of St. Edward’s. Moody finished with six birdies in the tournament after sinking birdies on the par-4, 331-yard third hole and the par-5, 437-yard seventh hole Tuesday.

Anna Mikish provided OCU with a 79-74-73–226, which tied for fifth place. Mikish, a senior from Choctaw, Okla., and Kate Goodwin of Oklahoma Christian topped the field with nine birdies. Mikish drained birdies on the third, par-4, 337-yard 10th and the par-5, 454-yard 14th holes on Tuesday.

The Stars’ Caroline Goodin turned in a 77-76-76–229, which was tied for eighth place. Goodin, a senior from Oklahoma City sank two third-round birdies and five in the tournament.

OCU plays next in the Little Rock Invitational on March 27-28 at Maumelle Country Club in Maumelle, Ark.

After another roller-coaster round, Oklahoma Christian barely held on to finish third. OC posted a final-round team score of 313 to close at 924, one shot ahead of tournament host (and Heartland Conference rival) Rogers State.

Ashton Nemecek, a freshman from Purcell, was the Lady Eagles’ top player in the tournament, recording a career-best eighth-place finish. For Nemecek, who shot a 6-over-par 78 in the final round to close at 229, it was her second top-10 finish in OC’s last three tournaments.

OC had two other top-15 finishers in the 62-woman field. Freshman Abigail Rigsby posted the team’s lowest round Tuesday, a 76, and was 12th overall at 232. Two shots behind her, tied for 14th, was sophomore Kate Goodwin, whose final-round 79 (which included a team-high three birdies) left her at 234.

Sophomore Elizabeth Freeman finished 29th at 239 after shooting an 80 on Tuesday while senior Allison Sell was 31st at 241 after posting an 84.

Ana Sofia Benavides of St. Edward’s won the individual title with a three-round score of 220.

After playing three tournaments in as many weeks, the Lady Eagles won’t play again until April 3-4, when they are scheduled to compete in the Lady Buff Spring Invitational at The Lodge at Ventana Canyon in Tucson, Ariz. That will be OC’s final event before the Heartland Conference Championship on April 24-25 at Apple Rock Golf Course in Horseshoe Bay, Texas.

Rogers State women’s golf closed out the Hillcat Classic Tuesday with a round of 302 to finish with a 925 (312-311-302) team 54-hole total to finish fourth. RSU tied for the best team score in the third round and finished one stroke behind third-place Oklahoma Christian as the Eagles shot 302-309-313—924.

Mica Eastin tallied her third top five finish of the spring as she shot 74 in day two for a 223 (76-73-74) total. The Hillcats junior finished two strokes out of second place Jessica Tamen of St. Edward’s.

Sophomore Stirling Phillips carded her best round of the three-round tournament with a four-over par 76 for a 237 tournament total and 25th place. Sydney Murray finished with an 82 in the final 18 holes of play on the par 72 course to finish in 51st place with a 262 (89-91-82) tournament total.

Rogers State will return to action at the West Texas Desert Shootout in Tucson, Ariz. at the Ventana Canyon Mountain Course on April 3-4.