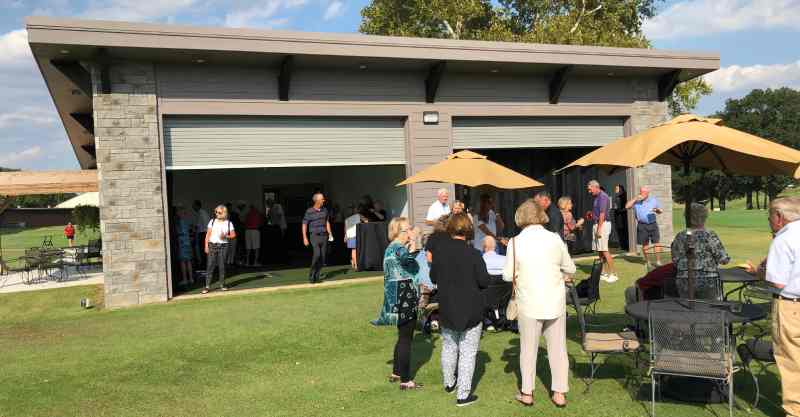 Giving remarks were Jim Curd and David Kedy, two of the members who led the fundraising to build the beautiful two-bay center in honor of the late Jerry Cozby, head professional at Hillcrest for 41 years.

Also speaking were head professional John Hron, Jerry’s son Cary, head professional at Southern Hills Country Club in Tulsa, and wife Karole. All emphasized how Jerry would have loved the teaching center, as helping members enjoy golf was a passion of his throughout his career.

“It’s a great legacy,” said son Craig, who drove in from Kansas City for the ceremony. “Dad was all about making sure people enjoyed the game. Whether it was teaching, or just making sure everyone had a good time.” “His deal was making sure everyone who came through the gate could put aside their troubles and just have fun,” Cary said. “That’s his legacy. We were basically raised by everybody who is here tonight. They always embraced us and treated us so well. Dad would have loved this building.”

“He was more about learning than he was about teaching,” Karole said. “He taught the game of life. Every day.”

The center has a teaching bay featuring Trackman and SwingCatalyst, which analyses weight distribution and swing force. A second bay with a simulator will be more for fun and inclement weather practice. The entry way is lined with pictures and memorabilia of Jerry as well as a plaque recognizing all who donated to the building. Curd said it would have easily cost over $400,000 if not for all the in-kind donations received, including land leveling, grading and sodding by member Dale Forrest, owner of United Golf, a golf construction firm. Others contributing include Dan Keleher, Gorman Construction, Randy Lawrence, golf architect Tripp Davis and Hillcrest Country Club itself.

PGA teaching professional Regina Goodwin came from Tulsa to attend. She said Jerry was one of the few pros who encouraged her to go into the business when she started in the early 1990s.

Hron said that some lessons have already been taught in the center but now that it’s officially open it’s about to get busy, just as Jerry would have wanted it.

Jerry passed away Aug. 23, 2020. He is a member of both the Oklahoma Golf Hall of Fame and PGA of America Hall of Fame.