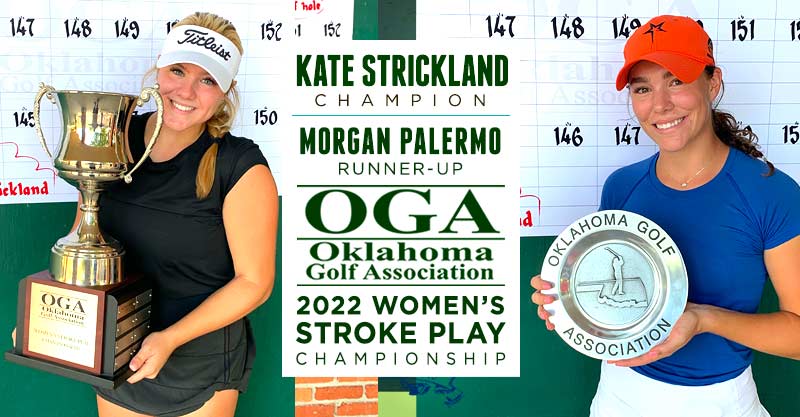 Kate Strickland shot a 3-under 69 to finish at 4-under and win the Oklahoma Golf Association Stroke Play Championship Tuesday at Meadowbrook Country Club.

Strickland, who will be a freshman at Oral Roberts University and hails from Lincoln, Neb., finished three shots ahead of fast-closing Morgan Palermo, a sophomore at Oklahoma City University who shot the tournament’s low round of 66 after opening with a 77.

Palermo’s 66 and Strickland’s 69 were both lower than any round achieved by the OGA Seniors and Super Seniors playing the same course, albeit from a slightly longer distance.

Strickland credited solid putting for the victory, while Palermo said she calmed her nerves after the shaky first round in shooting the lowest round of her competitive career. With Meadowbrook’s tight tree-lined fairways, both rounds were exceptional.

Third place went to her OCU teammate, the long-hitting Reagan Chaney of Ardmore, who shot 76-72 to finish at 4-over.  Natalie Gough of Bixby and OCU took fourth at 10-over while Josie Patterson of Chandler and Oklahoma Baptist was fifth at 11-over.