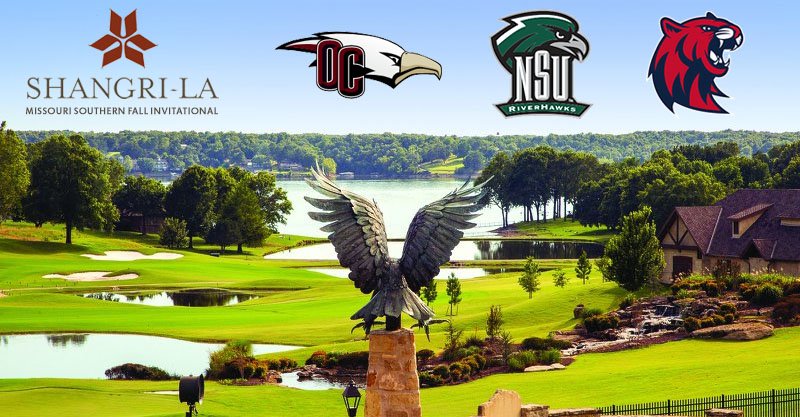 MONKEY ISLAND, Okla. (Sept. 27, 2021) – Alejandro Armijo put himself into contention and No. 14-ranked Oklahoma Christian moved up two spots in the team race in the second round on Monday on the opening day of the Missouri Southern Fall Invitational at Shangri-La Golf Club.

The Eagles posted team rounds of 292 and 291 on the 6,876-yard course, rising from fourth after the first round into a tie for second (among 18 teams) with Southern Arkansas and Rogers State at 583. OC, seeking what would be its third straight win in the Missouri Southern event, trailed junior-college power Hutchinson (Kan.) by 15 shots entering Tuesday’s final round.

Armijo, a junior from Rio Rancho, N.M., is seeking what would be his first collegiate tournament win since his freshman season at Oregon Tech. He opened with a 3-under-par 69 and followed that with a 73 for an overall total of 142 (2-under), putting him in a five-way tie for second, one shot behind Harry Crockett of Hutchinson.

Armijo went as low as 5-under in the first round after he eagled the par-5 No. 16, before closing that round with two bogeys. He had four birdies in his second round, helping to offset five bogeys.

Playing in his first collegiate tournament, freshman Exequiel Rodriguez of Buenos Aires, Argentina, improved round-to-round from a 74 to a 1-under 71. He had only one bogey during his second round. At 145, he was tied for 14th in the 100-man field.

Competing as an individual, OC freshman Santiago Villareal of Cordoba, Argentina, posted rounds of 73 and 78. He was tied for 46th at 151.

Rogers State was led by Aidan Gavey who is in a five-way tie for 7th with a two-round score of 143 (72-71). He finished the day with three eagles and six birdies.

Northeastern State is in fifth place, buoyed by a career-best opening round from Ryan Morant with a 4-under 68. He added a 75 and is 1-under through 36 holes.

Brayden Strickland turned in his career-best score in the afternoon with a 67, besting his previous low by three strokes.  He leaped up 51 spots on the leaderboard and is tied for 12th overall with a 144 (77-67).

Southwestern Oklahoma State is in ninth place and Southern Nazarene in 16th following the first 36 holes. Gregor Weck paces SWOSU in a tie for 12th with rounds of 71-73.