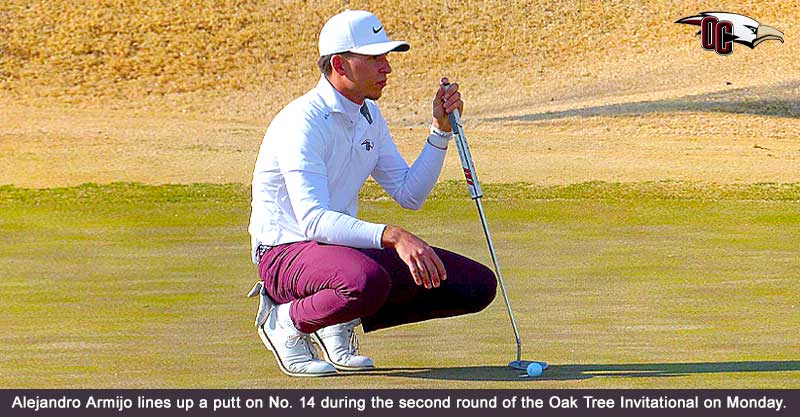 EDMOND, Okla. (March 14, 2022) – Playing on its home course, No. 7-ranked Oklahoma Christian blew out to a nine-shot lead on Monday after the first two rounds of the Oak Tree Invitational at Oak Tree Country Club’s East Course.

OC is seeking what would be its fourth tournament title of the 2021-22 season. The Eagles entered this week’s tournament with a 66-3 record this season against NCAA Division II competition.

The race for the individual title figures to be wild, with six players tied for the lead at 1-over 141 entering Tuesday’s final round. Two of those are OC players – sophomore Mateo Pulcini (70-71) and junior Alejandro Armijo (73-68). Armijo had one of Monday’s highlights, draining a difficult 40-foot birdie putt on the par-3 No. 14, one of five birdies he recorded in the second round. Pulcini also had five birdies in the second round.

Others tied for the lead are Hamish Murray of Cameron, Mitchell Ford of Henderson State, Roman Timmerman of Southern Arkansas and Gustavo Tineo of Southwestern Oklahoma State.

OC freshman Oskari Nikku (74-69—143) is among a group tied for seventh, just two shots behind the co-leaders. Armijo and Nikku are tied for third in the 78-man field with eight birdies apiece over their two rounds.

The Eagles fielded two complete teams in the tournament. The other two players on the A team, freshman Exequiel Rodriguez (75-77) and senior Andres Brictson (79-73) are tied for 42nd at 152.

The Eagles regularly practice on the Oak Tree courses and took over host duties for the annual March tournament at the course from local rival Central Oklahoma. OC hadn’t hosted a home tournament in the Oklahoma City metropolitan area since the fall 2011 season.