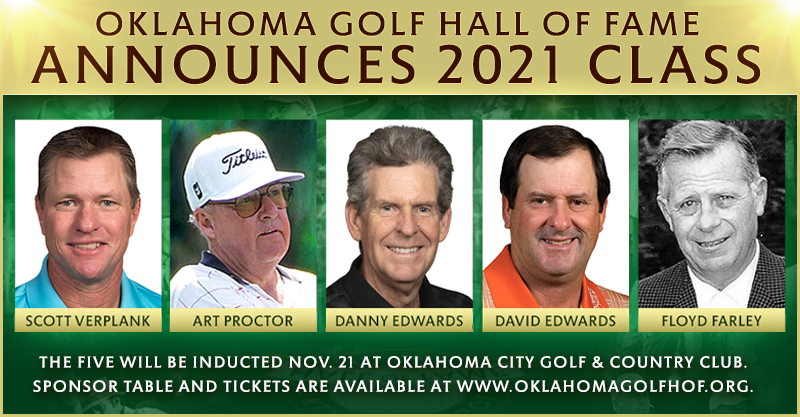 The connective threads linking the stories of the members of the 2021 Oklahoma Golf Hall of Fame class are quite remarkable.

Brothers David and Danny Edwards grew up playing at Kickingbird Golf Course in Edmond, designed by Floyd Farley. There they learned the game from the course’s first head professional Art Proctor.

Now both the Edwards brothers, Proctor and Farley will be entering the Hall together in a class that also features long-time Edmond resident and one of the state’s most accomplished professional golfers Scott Verplank.

“I think it will be one of the most unique classes that we’ll ever have,” said Tom Jones, chairman of the Oklahoma Golf Hall of Fame Executive Board and President and COO of Oak Tree National in Edmond. “First of all you have the Edwards brothers and the pro that was the influential reason they started playing golf. Then the architect that designed the course where they played and so many great public courses in the state.

“Then in Scott, you have a world class player who has played in the Ryder Cup, won the U.S. Amateur at Oak Tree and won a professional tournament as an amateur. I think it’s a very impressive class and the storylines and the way they tie in together are pretty incredible.”

The five will be inducted Nov. 21 at Oklahoma City Golf & Country Club. Sponsor tables and tickets are available at www.oklahomagolfhof.org.

“I am thrilled beyond words,” Proctor said. “I’m very seldom at a loss for words but when I was told about this  I was flabbergasted. I’m just very humbled and very proud to represent the state of Oklahoma and it’s great golf history.”

Between Danny (5), David (4) and Verplank (5), this class has won 14 PGA Tour events. While our state boasts designs from Perry Maxwell, A.W. Tillinghast, Tom Fazio and other notables, it is the more than 20 entertain- ing public course designs of Farley that provide great entertainment and challenge to tens of thousands of Oklahoma golfers.

Proctor was instrumental in turning Kickingbird into one of the busiest courses in the country, averaging more than 60,000 rounds annually. He started a junior golf program that led to Edmond becoming known nationwide as a hotbed of junior golf talent.

One of the few golfers to win a PGA Tour event (the 1985 Western Open) before winning the NCAA Championship, which he did for Oklahoma State in 1986, Verplank has walked the summit of the golf world but also had to fight his way out of some deep valleys.

A Type 1 diabetic, Verplank long played with a pump to control his blood sugar level. He has battled numerous other wrist, elbow and shoulder injuries and lost the entire 1997 season after elbow surgery in 1996.

Verplank was a mainstay of the “Oak Tree Gang” playing out of Oak Tree National in Edmond. He still plays on the Champions Tour but is also getting into broadcasting and has a contract with CBS.

When the Edwards family first moved from Wichita Falls to Edmond, Kickingbird had yet to open. Danny hit balls in a field, and often secretively, on the still growing-in course while no one was watching. Somehow he became proficient enough to win the state championship for Edmond and earn a scholarship to Oklahoma State.

A hard worker and driven to succeed, Danny became a two-time first-team All-American and two-time Big Eight Champion. He turned professional in 1973, earned his PGA Tour card in 1975 and went on to win five times (1977 Greater Greensboro Open, the 1980 Walt

In addition to the victories at OSU, Danny’s amateur career included a stint on the 1973 Walker Cup Team. He was low amateur the same summer at The Open Championship. He won the 1972 North and South Amateur and the 1972 Southeastern Amateur.

Although he played briefly on the Champions Tour, Danny was consumed with other opportunities. He was an original founder of Royal Grip, later successfully sold to investors. He became a highly proficient professional

Although some mistake his laid-back personality for a lack of the same drive that fueled older brother Danny, that would be a mistake.

“David was one of the most driven players we’ve ever had at Oklahoma State,” said former teammate Jones. “He wasn’t the best player when he got here but he was when he left.”

David, who did get to practice and play at the now-opened Kickingbird, went to OSU in 1974, where he aver- aged 77.6 shots per round as a freshman, lowering that to 71.8 as a senior when he won two events, finished second or third in five others and capped off his dominating year by winning the 1978 NCAA Individual Championship and leading the Cowboys to the team championship.

He didn’t take long as a professional to break into the win column, claiming the 1980 Walt Disney World National Team Championship with brother Danny, then winning the 1984 Los Angeles Open, the 1992 Memorial Tournament and the 1993 MCI Heritage Golf Classic. He also won the 2006 3M Championship on the Cham- pions Tour and was a two-time winner of the Oklahoma Open (1994 and 1996).

Whether making an appearance at a youth tournament, a golf expo or a charity function, David has always been generous with his time to give back to the game in Oklahoma.

Farley escorted A.W Tillinghast on his visit to Oklahoma, a trip that resulted in designs for Tulsa Country Club and The Oaks. He also credited Perry Maxwell and William Bell as influences. After returning from a stint in World War II, in 1941, Farley designed and built now-defunct Meridian Golf Club in Oklahoma City. He owned that course until 1961.

“Art’s impact on the Oklahoma Open championship was transformative and long-lasting,” McGraw said. “He took a dying event and turned it into one of the best State Open’s in the country.”

Proctor left Kickingbird to build a 45-hole golf complex near Arcadia, but he ended up losing his shirt and his investors in the oil collapse of 1987. He then took a running the Oklahoma State Parks golf courses, and made many significant improvements, including designing nine holes at Lake Murray, nine holes at Quartz Mountain and nine holes at Cedar Creek in Broken Bow.

He has also played in 14 national club professional championships with a top finish of third place.

In 1984 at the age of 44, Proctor played a then Guinness Book of Records mark by playing 414 holes of golf in one day. He teed off at Kickingbird in Edmond at 5:46 a.m. and finished his 23rd round of golf at 8:51 p.m., averaging about two minutes per hole. The amazing thing, other than endurance, was that he shot 6-under-par for the day.