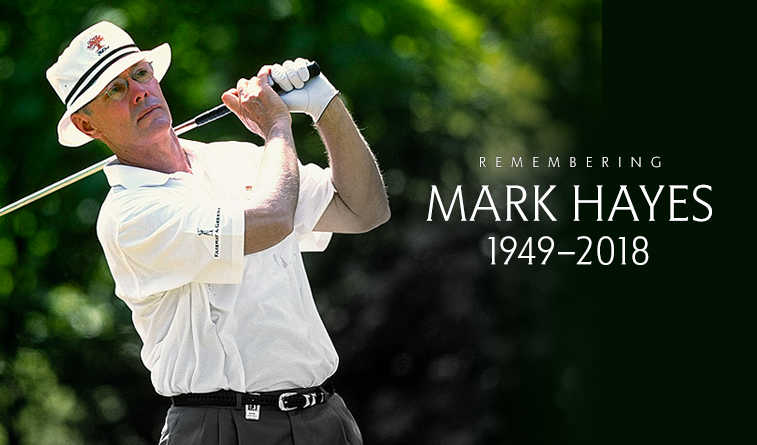 By Ken MacLeod and John Rohde

Mark Hayes, a legendary figure in Oklahoma golf and a 2017 inductee into the Oklahoma Golf Hall of Fame, passed away Tuesday, July 17 at the age of 69. Hayes was suffering from early onset Alzheimer’s Disease

Funeral arrangements are to be announced. Hayes is survived by his wife Jana and sons Kelly and Ryan as well as grandsons Parker and Clark.

“We’ve been friends since the sixth grade and he’s the reason I play golf,” said long-time friend and fellow 2017 Hall of Fame inductee Doug Tewell. “I’ve lost one of my best friends. It’s heartbreaking.”

Hayes excelled at an early age and just kept getting better and better. A native of Stillwater, Hayes won multiple in-state tournament tournaments while growing up and is considered to be one of the finest junior players Oklahoma has ever produced.

“He was a true Oklahoma golf legend,” said Mike McGraw, former Oklahoma State coach and Oklahoma golf historian. “I’ve always respected him as one of the hardest working guys in the game. He was a Ben Hogan-type figure to me growing up, one of the guys who would practice until his fingers bled. Maybe not really, but that’s what you thought of him. He just always
continued to work at his game.”

Hayes was the 1965 Class A state medalist playing at Northeast High School and later teamed with Tewell to win state titles at Stillwater (Donart) High School. He was Oklahoma’s 1967 and 1971 Oklahoma Golf Association State Amateur champion and in 1972 won both the prestigious Sunnehanna Amateur and the World Cup Amateur, helping the United States capture the Eisenhower Trophy.

Hayes played collegiately at Oklahoma State for Labron Harris (1968-71), where he was a two-time, first-team All-American his junior and senior seasons.

Known for wearing his signature bucket cap, Hayes turned professional in 1973, won three times on PGA Tour in the 1970s and also finished runner-up six times. He placed no worse than 68th for eight straight seasons (1974-81).

Hayes’ most historic major moment came when he shot a record 63 in the second round of the 1977 British Open on the Ailsa Course in Turnberry, Scotland.

Making the performance particularly impressive was the fact Hayes was playing in his first British Open, had carded an opening-round 76 and had suddenly switched his putting grip. Hayes went to a cross-handed grip for the second round at the encouragement of Bruce Lietzke, who that year had won two straight tournaments using the grip, and Mark Lye.

“It’s a very basic stroke that about 15 golfers on the U.S. tour were using,” Hayes said. “The biggest thing is getting yourself to putt that way without being afraid people will laugh.”

Hayes and Tewell were fast friends throughout their playing careers as Tewell strived to catch up to his childhood friend in accomplishments on the course.

“We had a lot of good times together,” Tewell said. “He was a blast to be around. He had a funny, very dry quiet humor, but if you could get him laughing it would go on for minutes. We just had so many great times together.”

In addition to his extensive practice habits, Hayes had a reputation as an early practitioner of strict diets and would not allow any junk food in the house, so much that Tewell took to hiding Sara Lee brownies in his fridge for Jana. However, once on a return trip from Japan to play in a team event in Florida, Tewell arrived at the condo the two had rented several hours early and found Hayes devouring a whole quart of Hagen-Dazs.

Hayes played on the victorious Ryder Cup team in 1979 and was teammates with Oak Tree neighbor Gil Morgan. Hayes, who won his Sunday singles match against Antonio Garrido, actually was first alternate for the team and ended up replacing leading money winner Tom Watson, who withdrew to be with his wife, Linda, for the birth of their first child.

From 1976-82, Hayes had Top-15 finishes in all four majors. His best finish was a tie for sixth at the 1980 U.S. Open at Baltusrol, where he began the final round just two strokes behind eventual winner Jack Nicklaus.

A long-time resident at Oak Tree National and a member of the famous Oak Tree Gang, Hayes was a three-time Oklahoma Open champion (1976, 1988, 1993) in the days when the field was its most competitive and culminated with a victory at age 44 across the street at Oak Tree Country Club. He also lost in a playoff to Tom Jones in 1983. Jones is now the President and COO of Oak Tree National.

In the late 1980s, Hayes began his own golf course design company and completed multiple projects throughout Oklahoma, neighboring states and also had two projects in South Africa.

Steve Kimmel, the director of golf at Oak Tree National, had looked out for Hayes during his battle against Alzheimer’s. He still played frequently up through early 2018 and the familiarity of the game and the swing seemed to help with his deteriorating condition.

“Mark was a great guy,” Kimmel said. “He had a fun side but he was also a stern, quiet guy who was very polite but also liked to keep to himself.”

“He was so stoic about the way he went about things,” Tewell said. “He really understood the game well and had he been a better putter he would have won many more times. I’ll never forget him.”

Mark and Jana married on New Year’s Eve in 1971 while he was on leave from the U.S. Army.