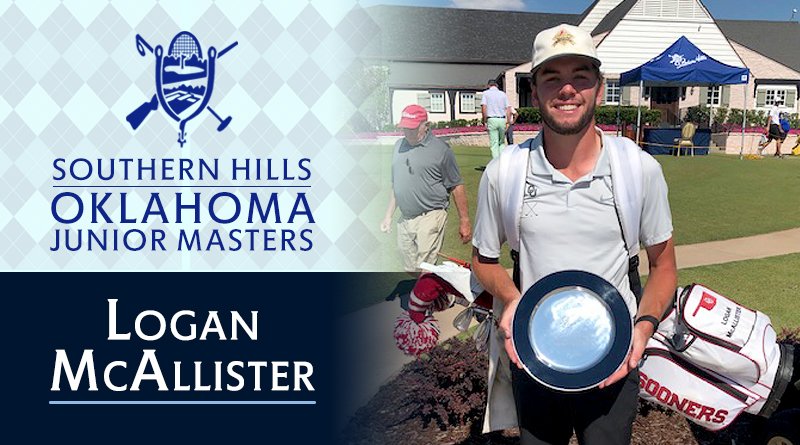 At the conclusion, there was just one lonely red number on the entire scoreboard of the Oklahoma Junior Masters at venerated Southern Hills Country Club.

Andrew Goodman of Norman shot a 2-under 34 on the back nine to finish at even-par 71, the only player in all three divisions (boys, girls and Oklahoma Junior Golf Tour alumni), to equal par in this 18-hole special invitational tournament put on by Southern Hills to help junior golfers across the state in a year marked by cancellations of their high school, collegiate and many summer events.

No other player, including some top collegians, broke par for any nine.

For the record, Raychel Nelke of Pocola won the girls division with a 76, while Logan McAllister of Oklahoma City won the alumni division, played from near the tips at almost 7,500 yards, with a 73. Yet winning seemed almost secondary to the joy so many of the contestants expressed at the opportunity to play Southern Hills, site of seven previous major championships with an eighth on the way (2030 PGA Championship).

Many were stepping foot on the course for the first time, including such accomplished and experienced players as McAllister, a University of Oklahoma junior from Oklahoma City, and Austin Eckroat of Edmond and Oklahoma State, who last week set a course record at feared Oak Tree National in Edmond with a 61, but Monday managed a 4-over 75.  Eckroat actually was a spectator as a boy at the 2007 PGA Championship won by Tiger Woods, but had little memory of the course from that experience.

His 75 was also shot by OU All-American Quade Cummins and by Matthew Braley of Broken Arrow and Grand Canyon State University.

“It’s a fantastic course,” Eckroat said. “The greens are so fast and so firm. If they were rolling a foot slower (on the stimpmeter) they would play so much bigger, but as it was you had to land it just perfectly to have a chance. The fairways are generous, but the green complexes are crazy. It’s really an incredible course.

“It was a battle. I hit a lot of iron shots I thought would be good and I’m looking up and they’re rolling off a green behind a bunker and I’m dead, no chance of getting up and down,” said Eckroat, who reached the par-5 fifth hole in two only to roll his eagle putt off the green and wind up with bogey. “You needed to understand the green complexes, there’s nowhere to miss.”

McAllister, a very talented player known for going low, splashed an eagle in from a a greenside bunker on the short par-4 17th, but otherwise was shut out in his attempts at birdie putts.

“I can now understand how this course has hosted all those major championships,” McAllister said. “It’s definitely one of the greatest tests of golf I’ve played, a lot harder than Pebble Beach for one. “

The greens were rolling 12.5 on the stimpmeter, according to Southern Hills superintendent Russ Myers. They were also firm despite the recent severe heat, thanks to the hydronic cooling system below the greens installed as part of the $11 million course renovation completed in 2019.

Goodman started with a bogey on the first hole and a double bogey on the second. But he birdied all three par-5s and figured out how to control his speeds on the greens in his fine round of 71, shot from closer to 7,000 yards.

“It was a shaky start, but I knew scores weren’t going to be low and if I could hang in there and settle down I would be fine,” Goodman said. “I started to get the speed down as the round went on.”

Goodman saw his second shot on 18 roll off the green and 30 yards down the hill, but made a nifty pitch and saved par to stay three shots ahead of Jake Hopper of Norman, second with a 74. Jaxon Dowell of Edmond was third with a 76, followed by Ben Stoller of Owasso and Matthew Smith of Oklahoma City at 77.

Nelke said she had a wonderful time puzzling out the slopes and rolls of the restored Perry Maxwell greens. She finished one shot ahead of Brooklyn Benn of Edmond with a 77 and seven clear of Maddi Kamas of Kingfisher (83).

Southern Hills Director of Golf Cary Cozby and his staff made the contestants feel welcome and special and said the club would strongly consider hosting similar events in the future.