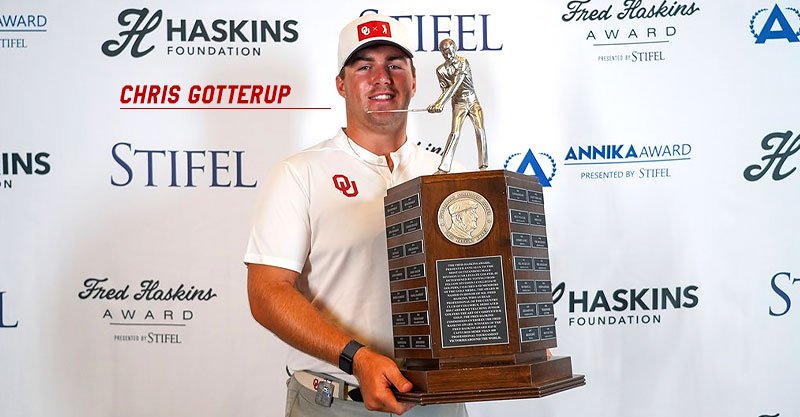 NORMAN – After producing one of the best single seasons in college golf history that led to a meteoric rise, Oklahoma men’s golf senior Chris Gotterup was named the winner of the Haskins Award, given annually to the nation’s top player.

Gotterup is the first Sooner to win the nation’s most prestigious individual honor, first awarded in 1971. He beat out a talented field that included teammate Logan McAllister to win the accolade in a year that set record totals for voting. The award is voted on by coaches, players and national media.

“I’m kind of lost for words. Looking at all of these names on here, to be associated with them is awesome,” said Gotterup upon receiving the award. “I never thought I would be here. This just gives me another notch on the belt that you can do it, and to be on the same list of people who are Hall of Famers in the game is really cool. This is surreal to be honest, and it has been a great journey.”

Gotterup, a fifth-year senior who transferred to Oklahoma from Rutgers for his final season, is the unanimous No. 1 collegiate golfer in the country per the Golfstat and Golfweek/Sagarin rankings. He posted victories at the East Lake Cup and Puerto Rico Classic this season and a runner-up finish at the Big 12 Championship. This week at the NCAA Championships, he finished one stroke off the champion, earning a share of fifth in the nation’s most challenging field.

“I wouldn’t be here without my four years at Rutgers,” continued Gotterup. “It really changed who I was, coming from a lost freshman to maturing as a senior. And now having the opportunity with the COVID year to play for Coach Hybl has been a dream journey for sure. I just want to play the best I can and see where it takes me.”

Because of his performance, he rose from outside of the top 60 in the PGA Tour U rankings to No. 6 in the organization’s final ranking, assuring the redshirt senior professional status on an affiliated tour of the PGA starting after the championship.

“We’re so excited and proud of Chris,” Oklahoma head coach Ryan Hybl said. “What he’s been able to do as an individual is so special. But what makes Chris really special is how great of a teammate he is and how he’s helped elevate this program.”

The Little Silver, N.J., product helped lead Oklahoma to a school record-tying seven wins in 2021-22, including the program’s 18th conference championship. In addition, he guided the Sooners to their sixth consecutive NCAA match play quarterfinals, where OU will seek to advance through the bracket and win its third national championship.

About the Fred Haskins Award

Celebrating its 52nd year, the Fred Haskins Award presented by Stifel has been given to players who have captured 32 major championships and more than 400 professional tournaments around the world. Past recipients include Tiger Woods, Phil Mickelson, Ben Crenshaw, and Justin Thomas. John Pak (FSU) won the 51st Haskins Award in 2021. The Fred Haskins Award is the oldest individual college golf award and the only award to be voted on by players, coaches, golf SID’s, and select golf media. Golf Channel and Golfweek are media partners for the Fred Haskins Award. More information on the Fred Haskins Award presented by Stifel at www.haskinsaward.com. Stifel, one of the nation’s leading wealth management and investment banking firms, serves as the presenting sponsor of both the ANNIKA and Haskins Awards, recognizing annually the most outstanding NCAA Division I female and male college golfers. Stifel also serves as a presenting sponsor for the NCAA Division I Women’s and Men’s Golf Championships on GOLF Channel.