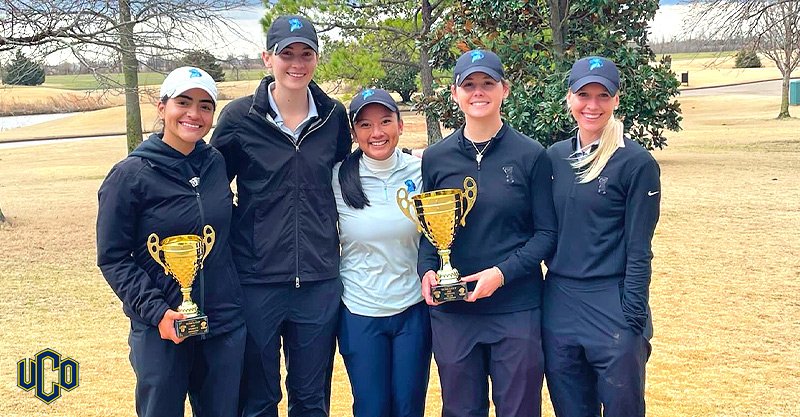 BILOXI, Miss. (Feb. 22) – Susana Olivares ran away with the individual title to lead Central Oklahoma to the team championship at the Tunica Cup that wrapped up Tuesday morning.

The scheduled 54-hole event was shortened to 36 holes after play was halted by darkness Monday evening and players needed just five or six holes to complete play Tuesday morning.

Olivares had a five-shot lead when the tournament was stopped Monday and went on to win by a whopping eight strokes after finishing off a final-round two-under-par 70.

The Bronchos ended up closing with a 305 to finish two trips around the 5,898-yard, par-72 Tunica National Golf Club with a 607 total in the first tournament of the spring season. Conference rival Central Missouri was nine shots back in second and Harding finished third at 624.

UCO had two other top-five finishers as Emma Shelley ended up fourth with a 153 total and Mika Ramos a career-best fifth at 154 after both ended with second-round 78s. Kinsley Hall had a 79 and Madison O’Dell an 85 in final-round play.

“It’s a great way to start the spring,” said 14th-year head coach Michael Bond, who has led the Bronchos to 31 wins. “We ended the fall with a lot of momentum and it was good to see us pick up where we left off. Now we just have to continue building on it.”

Olivares owned a one-shot lead after opening with a 73 in Monday’s morning round and was one-under through 13 holes when second-round play was suspended in opening up a five-stroke advantage.

The sophomore standout continued to pull away in the last five holes she had remaining Tuesday morning, birdieing her first hole before finishing with four straight pars to wrap up a two-under 70. That gave Olivares a one-under 143 total, good for an eight-shot win and the fourth tournament title of her sensational career.

Shelley had rounds of 75-78 in the tournament and Ramos shot 76-78. Shelley was three-over in her last six holes Tuesday, while Ramos was even-par in the five holes she had remaining.

Central returns to action March 7-8 at the Diffee Ford-Lincoln Invitational that will be hosted by Southern Nazarene at Lincoln Park East in Oklahoma City.