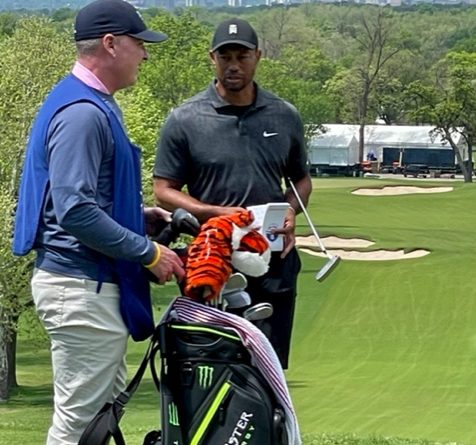 2022 PGA Championship Around Oklahoma Around the State Cary Cozby Tiger Woods
April 28, 2022May 7, 2022 Ken MacLeod
Like and Follow Golf Oklahoma

Cary Cozby, a huge Tiger Woods fan throughout his brilliant career, spent many an hour arguing with his late and legendary father Jerry, a Ben Hogan man himself, about what exactly made Woods the greatest ever to play the game.

One can only imagine his excitement when he learned a week ago that he would be carrying the bag for his idol on a private practice round at Southern Hills Country Club in preparation for the May 19-22 PGA Championship.

Cozby, the director of golf at Southern Hills, walked all 18 holes with Woods Thursday afternoon, discussing strategy, pin placements, changes to the course and myriad other details as Woods got his first look at the course since his victory in the 2007 PGA Championship.

Accompanied by his son Banks, 13, who fell to the ground with his hands on his head Thursday morning when told how he would be spending that afternoon, it was a dream come true for both. Banks caddied for Rob McNamara, the vice president of Tiger Woods Ventures. Chris Hubman, the chief financial officer of TGR Ventures was also in the group. Members were asked to remain on the hill overlooking the first and 10th tees and ninth and 18th greens.

The privacy didn’t stop a mini media frenzy. Reporters shot pictures of his private jet landing in Tulsa, took videos from behind the fence on 61st Street and plenty of photos and videos from members leaked out as well.

Also on the course was most of the Oklahoma team that finished third in last year’s PGA Jr. League national finals. They were there to film videos and interviews with PGA Jr. League national sponsor National Car Rental and got to watch Woods from fairly close on a few holes. There were also hundreds of construction workers busy erecting infrastructure for the tournament, and all stopped and stared when Woods passed by.

“Even workers who normally wouldn’t look up for anything, they all stopped what they were doing,” Cozby said. “It’s hard to comprehend the impact he has. It’s like the Beatles, Elvis or Muhammad Ali. When the tournament comes, we’re going to have people climbing in the trees on 61st Street just to get a glimpse.”

So now to the good stuff. How was Tiger playing, what did he think of the changes in the 2018 restoration by Gil Hanse, how was he walking and can he be competitive when the championship arrives in three weeks?

Forget the question about whether he’s going to play, that was pretty well answered Thursday.

“Unless he has a setback of some kind, he’s playing,” Cozby said. “This trip was all business.”

Cozby said Woods was swinging beautifully, hitting everything well from his driver, irons, chipping and putting. For the most part he was highly complimentary of the changes and picked Cozby’s brain for what he thought it would take to win. Woods’ prediction was 10-under.

Woods is using his trusted Scotty Cameron Newport 2 GSS putter that has been in his bag for his 15 major championship victories and Cozby said he was nervous just holding it. Woods let Banks try a long putt with it on 17.

“Banks putts cross handed and Tiger told him that putter has never been hit cross handed before,” Cozby said. “But he rolled a nice long one within two feet of the hole and Tiger said, ‘that’s pretty damn good right there.’ Pretty cool.”

Armed with a pin placement sheet from the 2021 Senior PGA Championship last May, Woods putted on each green to all four pins used in that event.

“Everything is so smooth with him now,” Cozby said. “His rhythm is great, he hit it straight and plenty far, he pitched and putted it great. I know guys can hit it past him now but watching him work was amazing. He’s so meticulous, detailed and immersed in what he’s doing. He was very inquisitive on lines and the best angles.

“I think he can contend. He’s like Michael Jordan late in his career, playing defense and hitting jump shots. Whoever wins here is going to have to be a great chipper and he is still that.”

Cozby said Woods handled most of the elevation just fine but was limping more noticeably on the final few holes, just as was evident at The Masters. The injuries he suffered in the February 2021 car accident are grievous and only Woods and his team know how much improvement is still possible.

For Woods, it was a well spent day at the office. For Cozby, who said he had not carried a tour bag that size for 18 holes in many a year, it was a day never to be forgotten.

“I could have gone another 18 easy,” Cozby said. “Obviously it was the best day of golf in my life when I didn’t hit a shot. Just because of how big of a fan I am and what he’s accomplished. To watch that for four hours was just incredible. I’m just in awe of his ability and how he handles every part of his game. To see it first hand was fantastic.”

“Banks is the same age as his son Charlie and they talked a lot about that. Banks obviously didn’t see him at his height, but when we told him this morning what he was going to be doing today he couldn’t believe it.”

Woods didn’t stick around long for chit chat after the round. Cozby said he and his small entourage, which included girlfriend Erica Herman, was back on his jet and bound for an event in Las Vegas not long after the round concluded. But all indications are Tulsa will see him again soon.