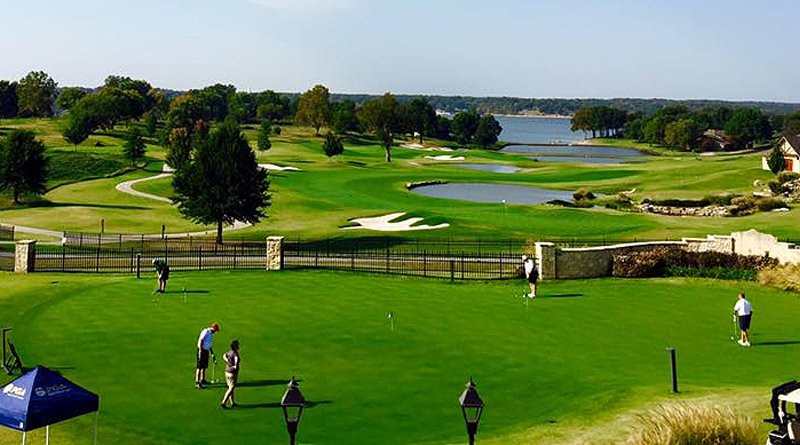 Temperatures soared into the high 80s, the sun finally showed its face and golfers continued to pack the more than 50 percent of Oklahoma courses that remained open this week, while those forced to close by city, county or tribal decree were budgeting for how long they could afford to maintain courses in the absence of revenue.

The debate as to whether golf is a safe activity to perform in a viral pandemic goes on, with most agreeing that courses that remain open are going above and beyond to create a safe environment. Yet all risk cannot be eliminated and the chances of an asymptomatic golfer getting too close to his partners and giving them the virus remains a possibility.

That possibility, however remote, is why Steve Carson, who runs Lincoln Park Golf Course in Oklahoma City, is not lobbying OKC mayor David Holt to reopen, even though his cash reserves are being depleted daily as he is paying his assistant pros to provide course security and five members of his maintenance crew to keep the course ready to reopen.

Carson said the course had cash reserves to keep the course maintained for up to 45 days but all revenue it is forgoing now will be missed in depleted reserves next winter. He estimated the course would lose at least 9,000 rounds of play in April along with food and beverage sales, tournaments, group outings and more easily exceeding $280,000 in revenue.

Notwithstanding the heavy toll, Carson said he understood the mayor’s decision.

“Despite all the precautions we take, we can’t eliminate the possibility that sometime during the round someone who is carrying the virus won’t get too close to his partners and sneeze or cough or even breathe and give it to them,” Carson said. “I can understand why we don’t want a city-owned recreational facility to be the place where the exact outcome we don’t want takes place. So I don’t have any problem with this.”

Alsie Hyden, who runs the 36-hole Lake Hefner facility in Oklahoma City, echoed Carson’s thoughts that he would like to reopen soon (the order expires May 1) but doesn’t want to be the cause of anyone contracting the virus.

On the other side of the coin, many courses are taking the viewpoint that it is their responsibility to provide a safe environment including eliminating virtually every touch point that could transmit the virus and depending on the golfers to practice safe social distancing from there, just as they would at home or on a walk. There is certainly opportunity on a golf course to stay much farther then the recommended six feet away from your playing partners.

And for the social media police who like to drive by and take pictures of a group of golfers and fire them off to city officials , the police or post on Facebook, the pictures here show how distance and perspective can alter reality.

Golfers who normally play the two city-owned and two county-owned public courses in Tulsa and Jenks have been fanning out to suburban courses in Broken Arrow, Owasso, Sapulpa and other nearby courses. Golfers from the three country clubs currently closed (Southern Hills, Tulsa Country Club, Meadowbrook Country Club) have been helping fill tee sheets at upscale venues such as Forest Ridge and Shangri-La Resort near Afton.

Golfers who normally play at Oklahoma City’s five municipal facilities have been jamming the public courses in Guthrie, Edmond and other nearby courses.

Golfers, otherwise spending most of their time holed up at home, have apparently decided that getting out for a few hours on the course is worth the risk, even though many are in the age group most vulnerable to serious problems if they contract coronavirus.

John Hron, director of golf at Hillcrest Country Club in Bartlesville, said the average age of his club member is 62 and he watched a group go past while chatting in which the youngest of the foursome was 72.

The Bartlesville City Council allowed both Hillcrest and its municipal course Adams Golf Course to remain open after a meeting Monday.

“Our members are aware of the situation and that it is serious, but they are thankful we are open. That is the constant refrain we hear, they are just so thankful to be able to do this when otherwise they are staying home almost all day.”

Precautions at Hillcrest include members getting their own bags from storage, single-rider carts, no touching of flags, bunker rakes, ballwashers, sand bottles, water stations removed, pencils and scorecards destroyed if left on cart, carts disinfected before and after each round.

At Forest Ridge in Broken Arrow, all those steps are used, plus General Manager Lance Allen said the carts are sprayed with hypochlorous acid as a final disinfectant. All carts are single riders, even if the riders are from the same family.

Allen said golfers were teeing off from 7:30 a.m. to 6:30 p.m. Tuesday, albeit in groups spaced out every 15 minutes to prevent any chance of more than one group gathering on a tee box.

“We’ve had quite a bit of TCC, Southern Hills and Meadowbrook members come by, some who haven’t seen the course in a long time,” Allen said. “We’re doing everything we can from a club standpoint to make the golfer and our staff feel safe. People have to have an outlet and if you can give them a way to enjoy being outside and enjoying one of their favorite activities in safety, they are very grateful.”

At Forest Ridge tee times are either paid for in advance or through a window in the pro shop. Members just check in outside.

“We’ve had precautionary practices for a month that the stores are just getting around to adopting,” Allen said. “We’re taking care of a lot of people safely.”

Even remaining open and busy, Forest Ridge is losing significant revenue. A $20,000 tournament that was scheduled Monday was canceled, tee times are spread apart more than normal, the restaurant is closed and outside food and beverage operations are a trifle of normal.

The city of Broken Arrow got representatives from all seven of the public and private golf courses in the city on a call to make sure each was using best practices as far as precautions and warned that any slip ups by any of the facilities could result in all of them being closed.

At Shangri-La, the hotel has been closed but the marina and golf course are open and busy. Owner Eddy Gibbs has vowed to pay the salaries of all employees during the closures. There are 250 employees on the payroll and 40 are still working.

“Fortunately we have Eddy Gibbs as an owner,” said Director of Communications Mike Williams. “I don’t know that there would be anybody better to work for in a crisis like this.”

Like the municipal courses in Oklahoma City, Tulsa County courses LaFortune Park and South Lakes are still being maintained and crews are using the time without golfers on the course to complete projects they normally would not have time to work on. At the City of Tulsa courses Page Belcher and Mohawk Park, the plan is still being formulated. The greens at a minimum will be mowed but there was no confirmation from city officials or representatives of course management company Billy Casper Golf that fairways would be mown or any other maintenance performed until such time as the courses reopen.

So should golf courses be open? Governor Kevin Stitt specifically exempted them from his closure of non-essential businesses. Many mayors, city councils and other municipal authorities have looked at the practices and the benefits to those using the facilities and said yes. Golfers, many of whom are otherwise complying with every aspect of stay-at-home, shelter-in-place and safer-at-home orders, have weighed the risks to themselves and others and decided to play. Others, such as the mayors of our two largest cities, have said not now, and basically don’t ask again. Hopefully the social distancing measures we’re all practicing will allow their reopening sooner rather than later.