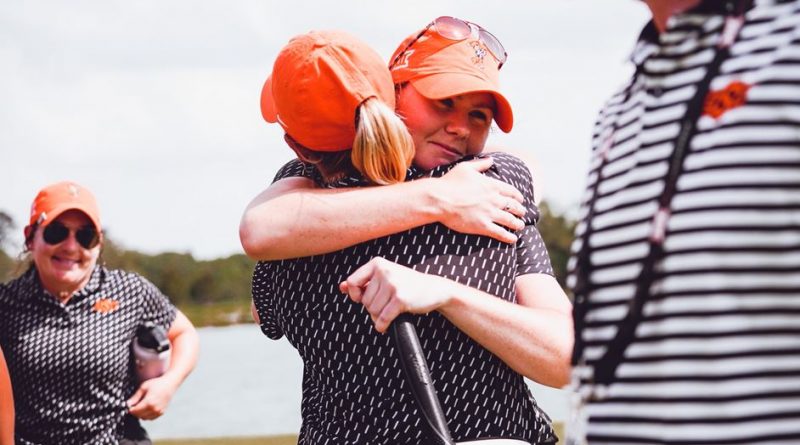 HOCKLEY, TEXAS — No. 6 Oklahoma State women’s golf’s Lianna Bailey secured the 2022 Big 12 Women’s Golf individual championship on Sunday at The Clubs at Houston Oaks in Hockley, Texas. As a team, the Cowgirls earned a runner-up finish after carding an 8-over to finish 27-over on the weekend at the 6,356-yard, par-71 course. The University of Oklahoma came in sixth, with Hannah Screen earning All Tournament Team honors with a top-10 finish.

With the win, Bailey became OSU’s first individual champion since Kenzie Neisen in 2016. It marked the 10thtime a Cowgirl has won the individual title while Bailey became the seventh different Oklahoma State competitor to do so.

A senior from Leicester, England, Bailey earned her third individual title of her collegiate career with the win and her first of the season.

Bailey finished Sunday with a 77 to finish the weekend 2-over. Overall, two Cowgirls finished in the top-5 on the individual leaderboard.

No. 14 Texas earned the team title with a 14-over in the final round to finish the tournament 24-over while No. 16 Baylor finished the day 6-over to finish 27-over in a tie for second with the Cowgirls.

Alongside Bailey, Han-Hsuan Yu carded a 68 to finish the day 3-under. The performance helped her finish the weekend 4-over as she jumped 13 spots on Sunday to finish tied for third.

Maddison Hinson-Tolchard shot a 75 while Rina Tatematsu finished the day with a 72 as the teammates closed the weekend tied for 19th at 12-over. Hailey Jones rounded out the OSU lineup at 19-over in 36th place.

As a team, OSU led the field in par-3 scoring, birdies and eagles.

For their efforts, both Bailey and Yu were named to the All-Tournament Team.

Through 11 tournaments this season, OSU has yet to finish outside the top-3 in the standings.

Looking ahead to the next step in postseason play, Oklahoma State is set to play host to the NCAA Stillwater Regional May 9-11 at Karsten Creek Golf Club. Spectators are welcome at the three-day event and there will be no admission charge. Parking is available along the road leading into the golf course.

“Hannah Screen had a solid week and registered another top-10 finish, “said Oklahoma women’s golf head coach Veronique Drouin-Luttrell. “She is a great player for us.”

Screen opened the tournament with back-to-back rounds of 73 and finished the final 18 4-over. The London, England product dropped a birdie on the second hole and finished the front nine even. Screen fell back after a bogey on the 12th and concluded her round 4-over 75. Screen was named to the Big 12 All-Tournament Team and it was her second consecutive all-tournament team honor.

Screen was joined in the top 20 by Mikhaela Fortuna, who tied for 19th and earned her second-consecutive top-20 finish at the Big 12 tournament. Fortuna tied for 12th at the 2021 Big 12 Women’s Golf Championship.

She finished the first eight holes with a clean scorecard and tallied a birdie on the par-3 fifth hole. Fortuna was even through the front nine and maintained her score through the 16th. She concluded her day with a 3-over 74 and was 12-over 225 for the tournament.

Meagan Winans concluded her first Big 12 Championship tied for 29th. The freshman from Richardson, Texas, tallied a pair of birdies on the front nine and finished 7-over 78. She ended the tournament with a 16-over 229.

Maria Fernanda Martinez moved up seven spots through the final round and tied for 32nd. Martinez finished the front nine 1-over 36 and earned a birdie on the eighth hole. She dropped back-to-back holes on the 12th and 13th and recorded five-consecutive pars to end her round. Martinez ended the championship 17-over 230.

Libby Winans moved up four spots on the final day and finished with a 4-over 75. The senior tallied her lone birdie of the round on the fifth and was 18-over 231 for the championship.

“We had a disappointing week and put ourselves in tough spots, which made it hard to recover,” said Drouin-Luttrell. “We now need to go back home and reset for the NCAA Regionals.”