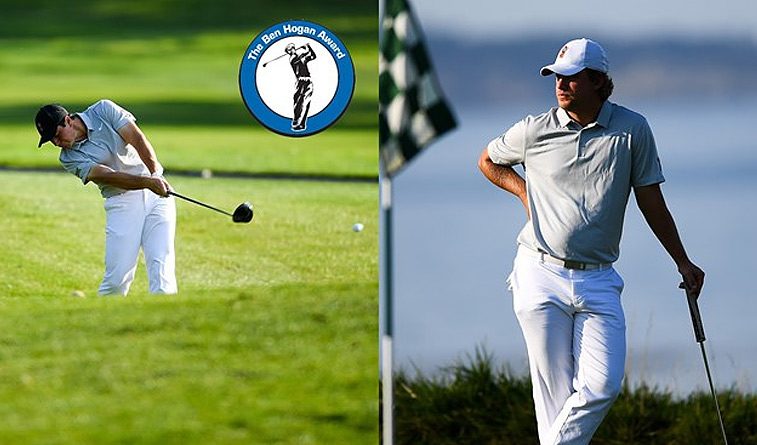 FORT WORTH, Texas – Oklahoma State’s Zach Bauchou and Viktor Hovland were among the 10 players named semifinalists for the 2018 Ben Hogan Award it was announced today by the Hogan Trophy Award Foundation, Friends of Golf (FOG) and the Golf Coaches Association of America (GCAA).

The Ben Hogan Award is issued annually in May to the top men’s NCAA Division I, II or III, NAIA or NJCAA college golfer taking into account all collegiate and amateur competitions during the past 12-month period. The award’s selection committee, which votes during each stage of the process, is comprised of nearly two dozen leaders and experts in professional, amateur and collegiate golf.

The inclusion of Bauchou and Hovland among the group means one school has multiple semifinalists for the second straight year. They are the 17th teammates to be semifinalists since 2002.

Each semifinalist’s school receives a scholarship grant for its men’s golf program. Since 2002, the Hogan Trophy Award Foundation has awarded over $700,000 in scholarships to more than two dozen universities.

The Ben Hogan Trophy was first issued in 1990 at Bel-Air Country Club in Los Angeles and also included academic achievement in its original list of standards. In 2002, the Ben Hogan Award moved to Colonial Country Club in Fort Worth, Texas, Hogan’s hometown and the site of five of his PGA TOUR victories. At that time, it revised its criteria to its current standard of honoring the outstanding amateur collegiate golfer. In 2005, the tradition of inviting the three finalists began.