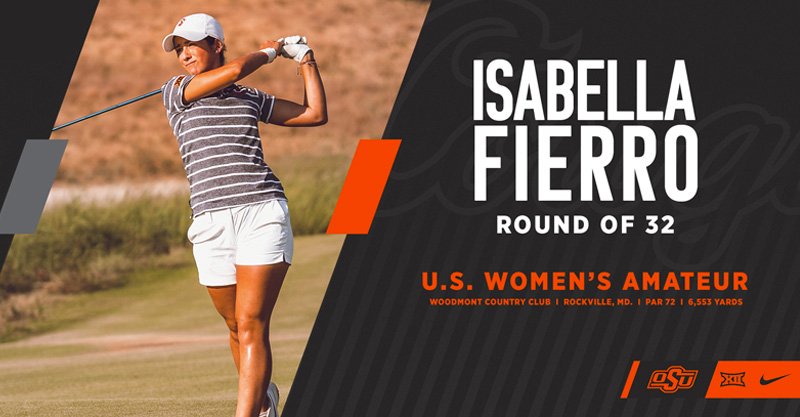 Medalist Rachel Heck won the first four holes against Therese Warner, then hung on in a rollercoaster match that set the tone on a day when many of the top seeds were threatened, but advanced to the Round of 32 in the U.S. Women’s Amateur Championship.

Oklahoma State’s Isabella Fierro advanced with a victory in 19 holes over Gina Kim of Durham, N.C. She then moved into the round of 16 with a 3 and 2 victory today over Courtney Dow of Frisco, Texas. Fierro was tied with Kennedy Swan of Austin, Texas through seven holes in the third round in a bid to make the quarterfinals. Live scoring here.

Libby Winans of the University of Oklahoma was defeated 4 and 3 by Hailey Borja of Lake Forest, Calif.

The No. 1 seed in the Women’s Amateur had lost in the Round of 64 in four of the past six years, but Heck, 18, of Memphis, Tenn., seemed to dismiss any thoughts of an upset in the early going. She remained 4 up through 11 holes, but Warner won the 12th and 14th, then drained a 50-foot birdie putt on the 17th to extend the match to the final hole.

“Neither of us gave anything away, I just got off to a hot start,” said Heck, who sank birdie putts of 20 feet and 35 feet on the first two holes. “I expected her to make a run and come back, which of course she did. We both had a lot of fun out there. It was a crazy match.”

In Heck’s 2-up victory, there were 11 winning birdies (with typical match-play concessions) and the players halved just four of the 18 holes at Woodmont Country Club.

Defending champion Gabriela Ruffels was 1 down through eight holes, but surged back by winning five of the next seven holes in a 3-and-2 win over Rajal Mistry.

“It was a little bit of a shaky start,” said Ruffels, 20, of Australia. “It took me a while to kind of get into it, but I was really happy with the way I finished.”

Complete scores and info at www.usga.org.