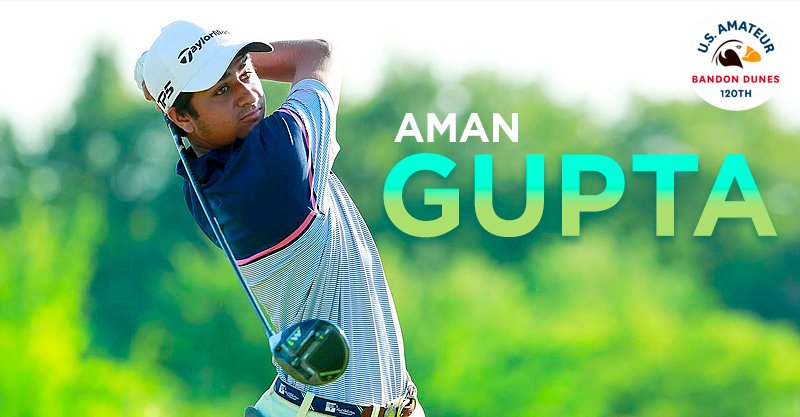 There were 15 players with Oklahoma ties as the U.S. Amateur Championship began at Bandon Dunes Golf Resort Monday. After Wednesday’s first round of match play, only one is left standing, the last one to get in the field.

Oklahoma State’s Aman Gupta, with his coach Alan Bratton serving as caddie, advanced to Thursday’s round of 32 with a 3 and 2 victory over Van Holmgren of Plymouth, Minn. Patrick Welch of the University of Oklahoma lost in the first round to Andrew Kozan of West Palm Beach, Fla., 4 and 3.

Gupta will play Jonathan Yaun of Minneola, Fla., in the second round Thursday morning at 8 a.m. PDT.

After Austin Eckroat failed to qualify for match play, Bratton, a 1995 USA Walker Cup Team member, was asked by Gupta to caddie. Bratton was on the bag for Cowboys Peter Uihlein (2010) and Viktor Hovland (2018) when they hoisted the Havemeyer Trophy.

Two rounds of match play are scheduled for Thursday, with the Round of 16 in the afternoon being broadcast live by NBC’s new streaming service, Peacock, for one hour (6 p.m.-7 p.m. EDT) followed by two hours on Golf Channel. The first Round-of-32 match is scheduled to start at 7 a.m. PDT. The Round of 16 is scheduled to begin at 1:30 p.m. PDT.

“I was excited, just because I wanted to play against someone good, and that way coming out of the gates, if I win, it just shows that I can play. Here I am.” – Matthew Sharpstene on beating 2019 runner-up John Augenstein

“The hardest part was that we teed off at 2:25 [p.m.] so I just had to sit around and do nothing all day, so that was a little tricky, but we managed it well and played solid all day.” – Wilson Furr on getting the last tee time of the Round of 64

“I wasn’t as nervous as I was in years past. It’s not in any way to say that I didn’t care, but I was a little bit more comfortable with the position. Obviously, you hope you win, but if you play great and get beat, that’s easier to take. I knew that I was playing some solid golf, and if I continued to execute, hopefully we could make it close.” – Stewart Hagestad on his mindset going into his Round-of-64 match

“My first initial thought was … wow, I got a tough draw. Then I was like, that’s a bad thought because I’ve been playing great golf, and I can beat this guy if I play my game and play one shot at a time like I’ve been playing this whole summer and this past school year. Just trusting in the process that God has put me here for a purpose.” – Jonathan Yaun on facing and then beating world No. 4 Davis Thompson

“I know Scott [Harvey], just hearing his name everywhere. He’s won pretty much everything at this point, it seems. So I knew I had a tough match ahead of me. He played really well yesterday. I think he shot 5-under [67] on Dunes. I knew I had to get off to a good start to just get some confidence going throughout the round, and I was able to do that.” – Davis Chatfield on beating two-time USGA champion Harvey

“This is the most exciting thing that’s happened to me in my golf career.” – Aaron Du after garnering the 64th and final seed for match play in the 18-for-3 playoff by making a 10-foot birdie putt on the par-4 11th hole, the second of the playoff

“I’ve known Karl for so long, and he knows my game and I know his. It’s basically like a puzzle piece, just finding what fits and what doesn’t. I think we make a pretty solid team out there. – Michael Thorbjornsen on having world No. 10 and fellow incoming Stanford freshman Karl Vilips serving as his caddie

*Round of 32 winners advance to the third round of match play on Thursday, beginning at 1:30 p.m. PDT