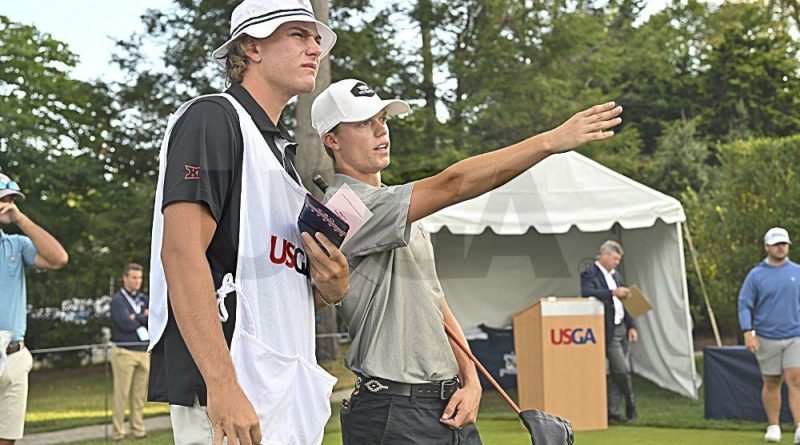 The U.S. Amateur Championship serves as a litmus test for the game’s best amateurs, a chance to challenge themselves on layouts strong enough to host major championships. On Day 1, The Ridgewood Country Club and stroke-play co-host Arcola Country Club more than held their own against these elite players in the 122nd edition of America’s oldest championship.

With a premium on driving accuracy – the rough was as high as 5 inches at Ridgewood – and greens rolling about 13 feet on the Stimpmeter, the field faced a pair of U.S. Open-like setups, and the scores were reflective of that philosophy. Add some sunshine and wind to firm up the conditions and there’s a reason why only 18 of the 312 players broke par on either venue: 7,403-yard, par-71 Ridgewood, an A.W. Tillinghast design that hosted the U.S. Amateur in 1974, and 7,251-yard, par-70 Arcola.

Five of the day’s six best scores came at Ridgewood, where 3-under 68s were posted by a group led by 2018 U.S. Junior Amateur champion Michael Thorbjornsen, of Wellesley, Mass. Fellow Bay Stater Chris Francoeur, of Amesbury, a 2022 University of Louisville graduate headed to Korn Ferry Tour Q-School later this month, matched that score.

Georgia Tech rising junior Christo Lamprecht, of South Africa, had the low round at Arcola, a 2-under 68.

Thorbjornsen, a rising junior at Stanford who qualified for this year’s U.S. Open at The Country Club not far from his hometown, used his experience in major events to his advantage on the difficult layout. Playing in his fifth U.S. Amateur, Thorbjornsen registered six birdies against three bogeys, two coming on his final three holes.

“Just not being surprised by anything, like how long the rough is, how fast the greens are, stuff like that,” said Thorbjornsen, the 2021 Western Amateur champion who finished fourth in the PGA Tour’s Travelers Championship in Cromwell, Conn., in June, a week after his second U.S. Open start. “I just feel very comfortable out here.”

Francoeur wasn’t in the field until last week, when his ex-college teammate and close friend Jiri Zuska, of the Czech Republic, became exempt by finishing in the top five of the Elite Amateur Series, a group of seven competitions that lead into the U.S. Amateur. Zuska was the medalist at the Berkshire Hills Country Club qualifier on June 30 in Pittsfield, Mass., with Francoeur earning first-alternate status. When Zuska became fully exempt, Francoeur got his spot.

“He stayed with me for the first two months of the summer, so I guess he owed me one there,” said Francoeur.

On Monday, Francoeur was 5 under through 15 holes, only to suffer bogeys on Nos. 6 and 8 (he started on No. 9). He had a ball bury in the lip of a bunker on the sixth and he missed the fairway on the 471-yard eighth hole of the composite course being used at the 27-hole facility. Holes 1-7 of the East Nine, 2-6 of the Central Nine and 4-9 of the West Nine make up the championship layout at Ridgewood.

Lamprecht was 3 under through 16 holes before making his second and final bogey of the day on the 497-yard, par-4 17th.

“I guess the overall expectation of this tournament, it’s hard,” said Lamprecht, who will represent his country Aug. 31-Sept 3 in the World Amateur Team Championship in France. “It’s the U.S. Open of amateur golf. There’s not a lot of birdies given to you. You’ve just got to play smart golf and not get carried away.”