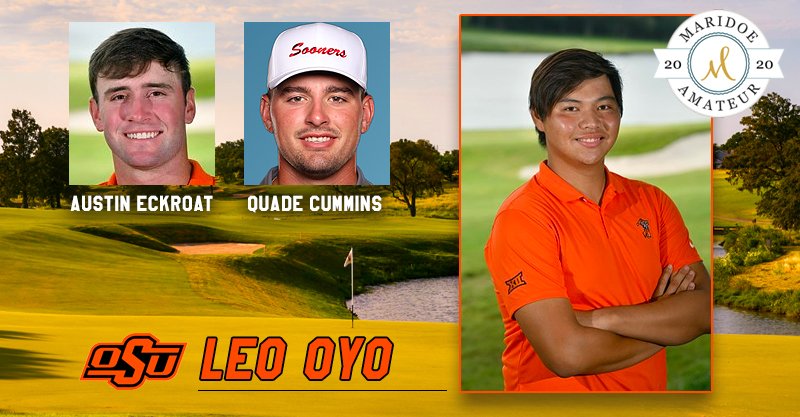 Oklahoma State golfer Leo Oyo is tied for the lead early in the second round of the Maridoe Amateur Championship, an individual event for collegiate golfers at Maridoe Golf Club in Carrolton, Texas.

Oyo was one of only three golfers in the elite field to break par in the opening round, his 2-under 70 was tied at the top alongside Frankie Capan of Florida Gulf Coast.

Garett Reband of the University of Oklahoma shot 4-over 76 and was in a nine-way tied for 21st along with teammate Logan McAlister. OU’s Patrick Welch and Mason Overstreet of Kingfisher and the University of Arkansas were tied for 48th after shooting 79. OU’s Jonathan Brightwell shot 80 in the first round.

The event opened Monday and runs through Sunday, as golfers will play 54 holes of stroke play before the field narrows to a bracket of 64 for match play. The tournament is a counting event for the WAGR and could help give golf fans a clearer picture of the U.S. Walker Cup team.

Another Sooner playing this week is All-American and No. 17 amateur in the world, Quade Cummins, who is set to play in the PGA Tour’s Mayakoba Golf Classic on Dec. 3-6. The Mayakoba was the first PGA Tour event ever played in Mexico and has been hosted annually at the El Camaleon Golf Club in Playa del Carmen since 2007. Cummins will tee off on Thursday in a field with former Sooner Abraham Ancer, along with 13 of the world’s top-50 professional golfers.

Oklahoma State All-American Austin Eckroat of Edmond is also in the field. Eckroat will join former Cowboys Viktor Hovland, Charles Howell III, Alex Noren, Bo Van Pelt and Kristoffer Ventura. The Mayakoba Golf Classic has a history of inviting some of the nation’s top amateurs and Eckroat is currently ranked fourth in the PGA TourU rankings and 18th in the WAGR, one spot behind Cummins.