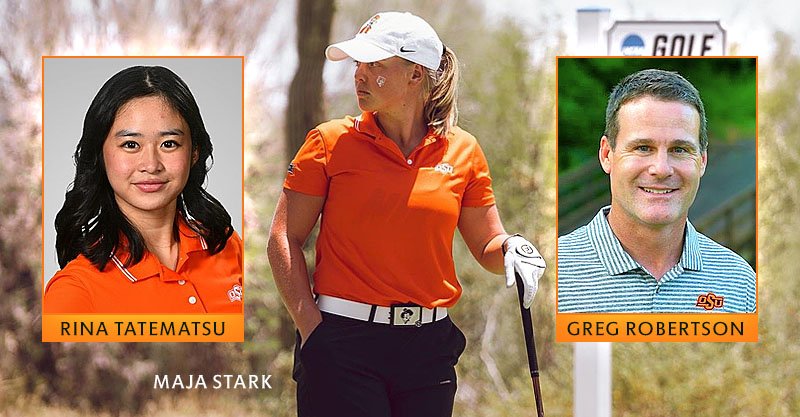 STILLWATER – Oklahoma State’s Maja Stark earned Big 12 Golfer of the Year, Rina Tatematsu was named Big 12 Freshman of the Year and Greg Robertson won Big 12 Coach of the Year, which gave the Cowgirl golf program a clean sweep of the league’s top prizes for the second time in school history.

In addition, OSU sophomore Isabella Fierro joined her two teammates on the 11-person All-Big 12 Conference Team. These are the first Big 12 postseason honors for this Cowgirl trio, and it marks the 11th time Oklahoma State had three or more representatives on the All-Big 12 squad.

This is the first time since 2008 that OSU swept the Big 12’s three major awards. That year, Pernilla Lindberg was named the Player of the Year, while Jaclyn Sweeny was the Newcomer of the Year and Laura Matthews won the Coach of the Year.

Stark was the Big 12’s lone WGCA First Team All-American, and ended her sophomore season ranked No. 4 by GolfStat with a 49-2 record in head-to-head competition against top-100 players in the country.

This marks the 11th Big 12 Golfer of the Year award for Oklahoma State and the first since Julie Yang in 2014.

Tatematsu, a 2021 WGCA Honorable Mention All-American, is the 10th Cowgirl to bring home the Big 12 Freshman/Newcomer of the Year award. She is ranked No. 42 by GolfStat, which makes her the highest ranked freshman in the Big 12. The Bangkok, Thailand native set a new program record for par-5 scoring with a mark of 4.66, and her overall scoring average of 71.85 (0.12 to par) is the fifth best ever by a Cowgirl golfer.

She recorded 20 rounds at par or better, which is the third best clip in school history, and her 118 birdies are the sixth most ever by an OSU player. Tatematsu won the ICON Invitational after carding back-to-back rounds of 66, and her 14-under 202 at that event is the fourth-best 54-hole score ever by a Cowgirl. She earned All-Big 12 Championship Team honors after a T8 finish.

This is the fifth career conference coach of the year award for Robertson, who was a four-time recipient of this honor while he was the head coach at Kent State in the Mid-American Conference. He represents the seventh Big 12 Coach of the Year award winner from OSU since the league was formed in 1996-97, and the first since Courtney Jones in 2016.

At her best in the year’s biggest moments, Fierro carded a 7-under 65 in the second round of the Big 12 Championships, which broke the event’s all-time scoring record. She finished the tournament in a tie for sixth to earn her first All-Big 12 Championship squad selection and ended the season at No. 20 in the GolfStat collegiate rankings.