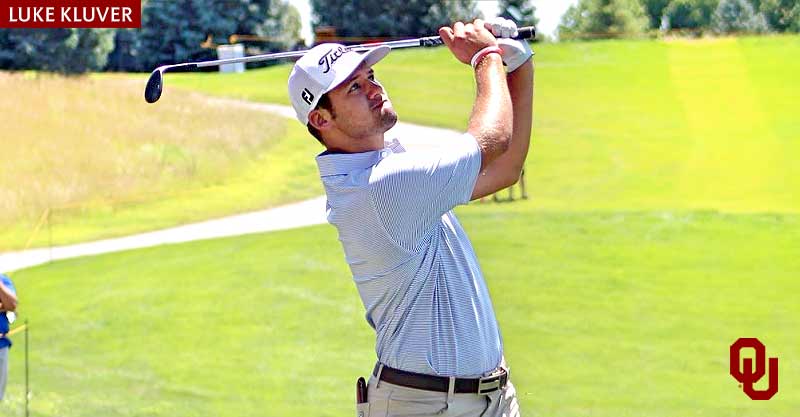 Kluver, who was largely responsible for Kansas’ ascension into the top 10 last season, joins the Sooners after three years in Lawrence and will come to Norman with two years of eligibility remaining.

“We’re incredibly excited to add Luke to our family,” Hybl said. “We know the type of player he is and what he brings to our program is invaluable. We can’t wait to get going.”

He closed the 2021-22 campaign ranked 138 by Golfstat and No. 2 on the Jayhawks’ roster. In his match play career, which consists of 14 matches at the Big 12 match play championship, Kluver has posted a 10-4 record.

“It feels great to know that I’m going to be part of a special team at Oklahoma,” Kluver said. “I chose OU because I believe that under this coaching staff and with the players that we have, we can truly achieve big things.”

He earned a sponsor’s exemption into the 2021 John Deere Classic, where he made the cut and finished 1-under par. Golfweek named him a top-10 freshman to watch entering his first year in Lawrence after a prep career that saw him earn the title of  Nebraska Junior Golfer of the Year in 2017 and 2018. He won a pair of Class A state championships and led Norfolk to the 2018 team title by winning medalist honors by eight shots.

The son of Klayton and Michelle Kluver, he is a one-time Big 12 Golfer of the Month and two-time Academic All-Big 12 first-team selection. He was recently named a 2021-22 GCAA All-American Scholar for the second consecutive year.

Kluver will bolster an Oklahoma roster that won a school-record-tying seven events last season, highlighted by the program’s 18th conference championship. Led by Haskins Award Winner Chris Gotterup and first-team All-American Logan McAllister, both recent graduates, the Sooners were the nation’s No. 1 overall seed for the second consecutive year at the NCAA Championship and advanced to an NCAA record sixth straight NCAA quarterfinal match. The 2022-23 Sooners will look to replace Gotterup and McAllister’s production with the addition of Kluver alongside a freshman class that features a pair of top-20 recruits in Jase Summy and Matthew Troutman, along with Oklahoma high school state champion Jake Hopper. In addition, OU veteran All-American Patrick Welch returns for a final season in Norman, as does national All-Freshman selection Drew Goodman. Three other Sooners who saw action last season also return to Hybl’s team.

Under Hybl’s leadership, the OU men’s golf program has taken in a transfer the past two seasons and helped guide them to All-America status. In 2021, Jonathan Brightwell transferred to OU after four years at UNC Greensboro and became a second-team All-America selection. Brightwell rose over 50 spots in national rankings to earn automatic professional status through the PGA Tour U program. In 2022, Gotterup transferred to Oklahoma from Rutgers and compiled the best single-season performance in school history en route to OU’s first Haskins Award winner.

Oklahoma’s 2022-23 schedule will be released at a later date.