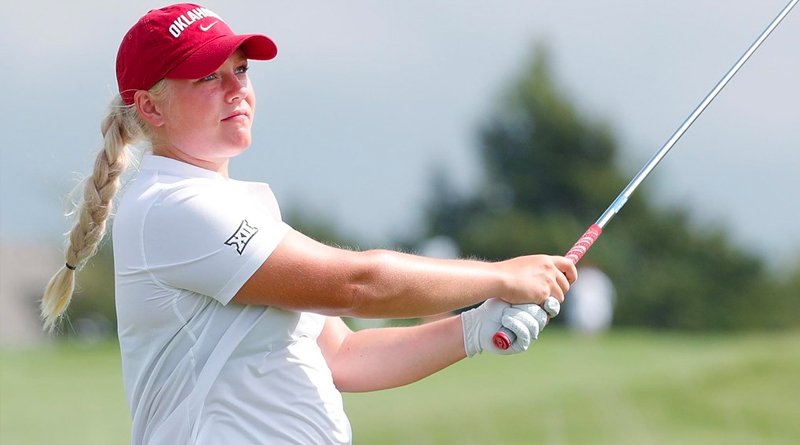 NORMAN – Oklahoma women’s golf closed the fall season with a third-place finish at the White Sands Invitational in Nasau, Bahamas. The Sooners shot a final-round score of 278 (-10) on Tuesday to finish with a 54-hole total of 858 (-6) at the par-72, 6,415-yard Ocean Club Golf Course.

The finish was OU’s best of the fall season and came in against a loaded field that featured five top-25 teams. Texas took the team title by shooting an 828 (-36) and Arkansas came in second at 857 (-7).

“We played so well the last couple days and had a strong finish this week,” said OU head coach Veronique Drouin-Luttrell. “I’m proud of the grit we showed after the first round and ended the fall season on a strong note. Now we have a couple months to get to work and be ready to up where we left off in February.”

Four Sooners finished in the top 25 of the individual standings, led by junior Kaitlin Milligan in a tie for sixth place. Milligan shot a 3-under 69 to finish the tournament with a 211 (-5) and pick up her second straight top-10 showing.

Sophomore Mikhaela Fortuna finished with a 54-hole score of 215 (-1) to tie for 12th. The sophomore fired a 66 in the final round recording her career low.

Sydney Youngblood and Maria Fernanda Martinez shared 21st place with a 218 (+2). Youngblood posted a 69 (-3) on Tuesday, collecting her fourth round under par. Martinez shot a 74 (+2) in the final round to capturing her career best finish.

The Sooners now take a break from competition until the spring portion of their schedule begins in Peoria, Ariz. at the Westbrook Invitational on Feb. 23.