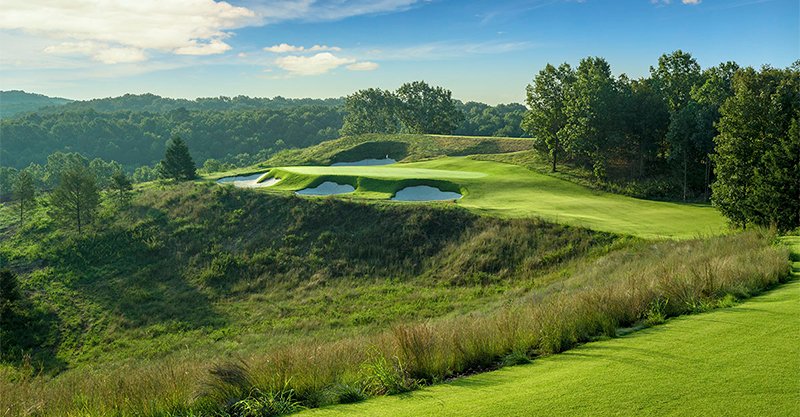 (Branson, Missouri) – Ozarks National, designed by Bill Coore and Ben Crenshaw, added to the list of honors it has received by being named to Golf Magazine’s Best Course in Every State list as No. 3 among all courses in Missouri.

Ozarks National was the only public access course on Missouri’s list. It is one of the highlights of the Big Cedar Golf destination that also includes the new Payne’s Valley designed by Tiger Woods that opened to great acclaim this fall. Other courses at Big Cedar are Buffalo Ridge (Tom Fazio), Top of the Rock (Jack Nicklaus) and Mountain Top (Gary Player.)

Wrote one Golf Top 100 Course Rater about Ozarks National: “Despite the severity of the property, Coore and Crenshaw created an intimate routing in which holes lay firmly on the rugged ridges that encompass the area. This creates several blind shots and more than a few uphill ones — a couple to skyline greens. Too many other modern designers would have bulldozed the landscape to mitigate the blind shots – not Coore and Crenshaw! Therefore, the overall feeling is quite natural – and the long vistas are stunning. Very wide fairways mitigate the big slopes but strategic bunkering and complex greens lend challenge and variety. The ground game is alive and well at Ozarks National.”

This isn’t the first top ranking for Ozarks National, which garnered “Best New Public Course in America” upon opening in 2019. Earlier this year – along with three other Branson Golf venues – it was rated No. 1 in Missouri by Golfweek. Buffalo Ridge, Branson Hills (Chuck Smith), and Ledgestone (Tom Clark) joined it to hold four of the state’s top 10 spots, including the top three.

“You know you’re in the Ozarks, and it was our job to complement that, with the way that the holes fit together, and the directions they are going,” said Crenshaw. “We’re very proud of [Ozarks National].”