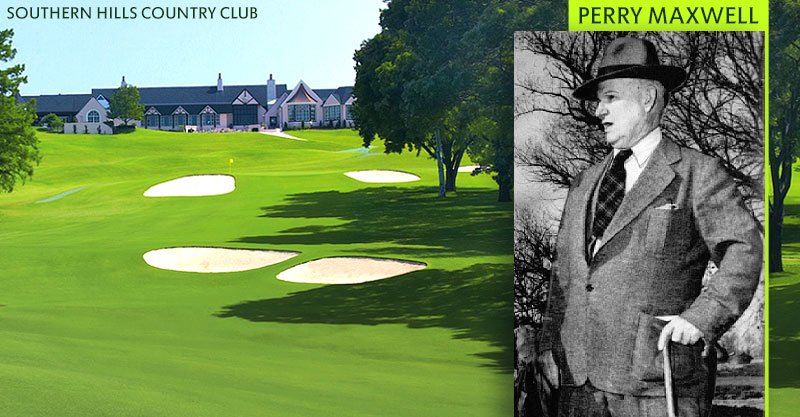 From the vault, here is a look back at a Golf Oklahoma piece on Southern Hills architect Perry Maxwell from his induction into the Oklahoma Golf Hall of Fame in 2014.

Perry Maxwell is one of the greatest golfing figures in the history of Oklahoma.  What would surprise so many is that he was not a native Sooner, but a transplant from Kentucky.

Maxwell was born and raised near the town of Princeton in southwestern Kentucky. After graduation from high school, he moved to find a better locale to help with his afflictions of eczema and consumption.

Maxwell toured the southern United States and decided that Ardmore, Oklahoma, was the place for him and his wife, Ray Woods. He soon found employment with the Ardmore National Bank. Maxwell quickly rose up the ladder and began to network with those who became the first group of oil tycoons.

The Maxwells became a centerpiece of the Ardmore social scene with their four children, Perry’s place of prominence at the bank, and their involvement in community activities.  He was also a prominent tennis player and state champion. His wife eventually asked that he undertake an activity that was less stressful on the body and recommended golf, the sport that was beginning to sweep the nation with popularity from Francis Ouimet’s victory in the U.S. Open.  It was shortly after this that Maxwell purchased an old dairy farm north of town.

Maxwell’s affinity for golf took hold but he lacked any nearby courses to play. With so much land at his use, he decided to build his own private four-hole golf course. After the course was completed, other investors asked Maxwell to add holes and in 1914 he began what would become the Dornick Hills Country Club.

Soon after taking up his newfound hobby, Maxwell decided that he should learn how to build a golf course. He thought no finer teacher could be found than Charles Blair Macdonald, the builder of the National Golf Links of America in Southampton, New York. Maxwell first became aware of Macdonald while reading an article about the course in Scribner’s Magazine. Upon visiting with him,  Maxwell quickly took to the template designed golf course that was based on classic holes found in Scotland and England. The concept would stick with Maxwell as he would come back and build several renditions of these holes on his home course in Ardmore.

Another lesson that Maxwell took from Macdonald was to find a man that could help put his ideas into the ground. Macdonald relied on an engineer named Seth Raynor. Maxwell would lean on someone within his family. Brother-in-law Dean Woods was a civil engineer who moved from the copper mines of Arizona to help Maxwell start his own golf course construction business.

Early in his career, Maxwell determined that he needed to find the perfect grass to use at Dornick Hills and scoured the southern United States. He settled on a strain of Bermuda that was heat resistant. Maxwell would become the foremost expert on the use of the grass and would sit on the USGA Green Section.

While touring courses across the United States, Maxwell was obviously influenced by other designers, primarily Donald Ross of Pinehurst, North Carolina.  Maxwell soon adopted a couple of traits from Ross designs, primarily using high points of golf courses as often as possible for tee and green locations.

In the early 1920s, Maxwell enhanced his knowledge by going to England and Scotland to study the great links courses such as St. Andrews, Hoylake, and North Berwick. He took his lessons on how those great courses used the lay of the land to shape the holes.

While on this trip, Maxwell also made the acquaintance of Dr. Alister Mackenzie, a meeting that would prove fruitful just a few years later. Once Maxwell returned, he incorporated the knowledge he had gained from Macdonald, Ross, Mackenzie and other designers and began building courses that incorporated specific traits that are acutely Maxwellian in nature.

Perhaps the best known traits of Maxwell’s golf courses were his green designs. He became famous for undulating surfaces that had humps within them.  These were mockingly referred to as “Maxwell Rolls”, a play on words with the names of two well-known automobile manufacturers.  But his putting surfaces had more than rolls. They featured slope and spines, angles and strategy, and other facets that made them enjoyable with every round. Maxwell became known for this feature and was hired by several clubs to redesign greens for their course over his career.

But Maxwell was most prominent in Oklahoma. He built 40 courses across the state. His first effort at Dornick Hill took nearly 10 years to complete and featured the state’s first grass greens. The course was immediately labeled as Oklahoma’s best and began hosting regional and state tournaments. It was a stop on the national golf tour for a brief time in the 1950s and has since hosted many prominent collegiate events, including the annual Maxwell tournament that drew several of the NCAA’s top teams.

Soon after Dornick Hills’ completion, Maxwell took on his next major contract for the course that would become Twin Hills in Oklahoma City. Twin Hills was an ambitious project over some rough terrain. Maxwell completed what some feel was his best routing of a golf course. The course was immediately hailed as a success and was awarded the 1935 PGA Championship that was won by Johnny Revolta. Twin Hills, a true departure from Dornick, featured many attributes that Maxwell had learned from his study of the golf courses in the southern United States and during his study tour of British links courses and avoided the template style that he used at Dornick.

After Twin Hills, Maxwell formed a partnership with Mackenzie. The two men worked on several courses, including the University of Michigan Golf Course and the Crystal Downs Country Club in Frankfort, Michigan. Another of their combined efforts was the Nichols Hills Country Club, now known as the Oklahoma City Golf and Country Club (OCGCC). This project was intended to be a 36-hole layout.

Maxwell secured the contract and laid out nearly the entire complex. Mackenzie visited the course a couple of times and provided his input. OCGCC received instant recognition. It has been reduced to 18 holes, but has hosted several regional events and the 1951 U.S. Amateur. The course lacks the elevation changes of Twin Hills and Dornick, but it features some of the best use of land movement in Maxwell’s career. These three courses would have been a great trio for any designer to hang their hat on, but Maxwell topped them all with the completion of Southern Hills in Tulsa in the mid-1930s. The course has hosted many important events including seven major championships. It has become the face of Oklahoma golf for the world. The routing and design of the course is considered the pinnacle of Maxwell’s designs by many. The design and maintenance of the course have shaped much of what is considered great across the state of Oklahoma.

Maxwell’s courses span across the state and include other great efforts such as the Hillcrest Country Club in Bartlesville, the Muskogee Country Club, and  Oakwood in Enid. All of them share in the great legacy of one of the most undervalued golf personalities in golf’s history. But Maxwell has begun to receive his due in some circles during the past decade.

Maxwell’s career was undervalued due to a lack of understanding about his impact. Many people assumed that he had designed a small number of courses and was an understudy to Mackenzie for his entire career. Most are shocked to hear that he worked on 82 original designs and dozens of renovation projects throughout his career with only a handful of those involving Mackenzie.

Others also failed to recognize that Maxwell’s philosophy of being a minimalist was not only about less movement of dirt, but also about budgets for the design and lower maintenance costs once the course was completed. That philosophy speaks louder today than at any other time as courses look for ways to squeeze every penny in a highly competitive marketplace.

All of this is accompanied by a recent rise in understanding about his work as nationally known architects such as Tripp Davis or Keith Foster or the team of Bill Coore and Ben Crenshaw restore or touch up some of the classic Maxwell designs, including the Old Town Club in Winston-Salem, North Carolina, or Hillcrest, or even bring back some of that beauty at Southern Hills. The golf world is finally realizing that the impact of Perry Maxwell extended beyond just his movement of the 10th green at Augusta National.

Chris Clouser is the author of The Midwest Associate, The Life and Work of Perry Duke Maxwell.