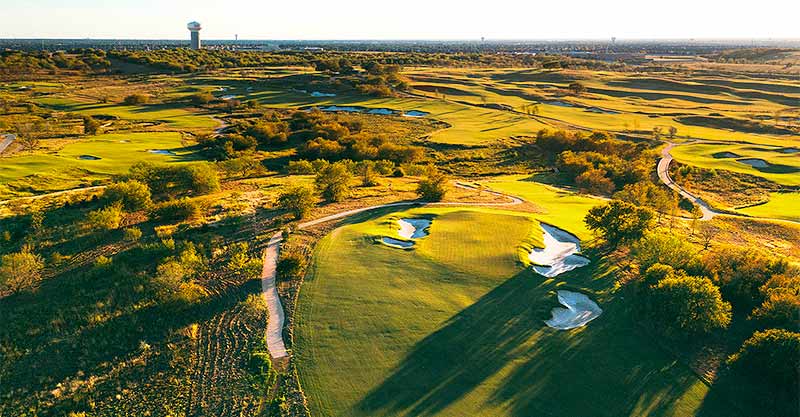 TULSA – The latest evolution of the massive public access golf resort PGA Frisco,  30 minutes north of Dallas and an hour from the Oklahoma border, is the best yet according to PGA of America CEO Seth Waugh, with the new PGA headquarters open and the course welcoming its first golfers.

“The reality of PGA Frisco is better than the dream ever was,” said Waugh at his annual PGA of America press conference. “Our people who have been there for a couple of weeks now are blown away by how good it is. We’ve started to do education seminars and just having people in the building, the energy has been great.”

The four story headquarters will house the large group of PGA employees who moved from their previous headquarters in West Palm Beach, Florida with a total number of 600 in Frisco eventually expected to be hired

The Northern Texas PGA will open its own headquarters in August with the shops, restaurants, and 10-hole short course opening later this year. The 500-room Omni Resort will open the spring of 2023 with all 36 holes, the championship course designed by Gil Hanse, and the West Course designed by Beau Welling  open to the public next spring.

The courses are now known as PGA Frisco at Field Ranch for the Fields family who donated the land. A greens fee price has not been set yet, but the contract with the City of Frisco mandates that city residents will pay less than anyone else who plays the two public courses.

“We feel like PGA Frisco will be a destination for all of golf. People will come here to play, to shop, to eat and to learn,” said Waugh.

While Waugh said he has toured the golf courses several times along with several PGA Tour pros and commissioner Jay Monahan who were in town last week for the Byron Nelson event he has not actually played. The first rounds of golf have started to be played on the East Course.

“Mate, it was awesome,” Harrison said of one of the first rounds played there. “We played it from around 6,500 yards and I kept looking back on almost every hole and it seemed like there was always 100 yards behind us. There is a lot of golf courses there, but the green complexex are awesome the fairways are really wide, but if you get in the fescue, it could be trouble.”

Harrison took along NTPGA COO Ryan Kossick along with North Texas golf pro Nic Ishee who qualified for the PGA Championship this year, with Kossick saying golfers off all skill levels are in for a treat when they are able to play the course.

“The Elevation and overall feel of the course is not typical of a Dallas-Fort Worth course. It will require a lot of different shots and will be fun to play.”

During the early stage of course development, PGA organizers discussed opening the two courses first and following with the Omni Resort later, but the hotel company, also based in Dallas, indicated they didn’t want the course to open in what they termed a construction zone.

The two courses will now open only a few weeks before the first PGA major held next May with 2023 PGA Senior Championship.

“We want this to be a laboratory for golf, a draw for golf, some have called it a St. Andrews,” said Waugh. “People will come from everywhere to see this and they will be blown away how good it is.”

Next year, the PGA Seniors will be the exact same dates, May 22-29, as the PGA Tour event at Colonial Country Club in Fort Worth.

“It’s a great market which can support a lot of golf, but we want to be careful that we don’t have everything on top of each other,” Waugh said.

But starting next May, Oklahoma and Texas golf fans will have more opportunity for playing and watching golf at the PGA Frisco Fields Ranch Complex.