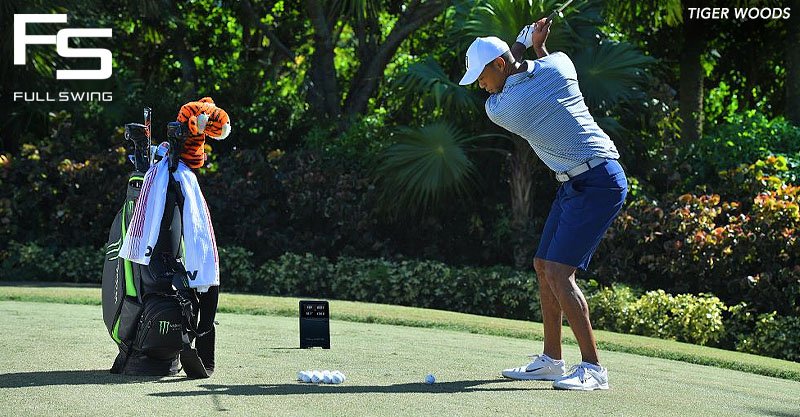 Tiger Woods knows a thing or two about golf marketing.

The day in late November that he posted a one-shot swing video with the words “making progress” the golf world went into full Tiger mania mode. The small launch monitor placed behind him recording his shot information was mostly overlooked at first.

That didn’t last.  As we said, Woods knows what’s he’s doing, and he is an investor in the small and portable Full Swing Golf Monitor. This is a monitor that retails for $4,000 yet is designed to measure everything that larger and more expensive monitors such as TrackMan measure.

We tested the monitor on the range at Streamsong Resort in central Florida during the PGA Merchandise Show. The display area immediately shows you four categories, whether you are looking for ball speed, swing speed, carry distance and launch angle or whatever is most important to you. A full readout of the other categories can then be viewed either on the monitor or on your smart phone.

Sales of the portable monitor went through the roof after it became associated with Tiger’s hopeful video. Like it’s more expensive forerunners, plug it into a screen and it serves as a simulator, giving you the ability to play courses from around the world.

While the $4k price tag won’t bother pros and some club level golfers bent on improvement, the Full Swing Golf Monitor may find a huge niche serving golf teams that previously had to take turns around one monitor by making the ability to purchase several more affordable.

In a first for me, I put on a cold soaking wet skin suit and then was hooked up to electrodes from neck to thigh. Then a burly ex Army ranger put me through a 20-minute workout while being electrocuted that left my muscles sore and sweat pouring down my forehead, though I didn’t lift an ounce of weight.

Welcome to the miha bodytec workout, an electric muscle stimulation (EMS) workout that makes you feel like you’ve been pumping iron for hours. Arm curls feel a bit different when your muscles are dancing to a voltage meter.

Carson Kemp, the aforementioned Army Ranger, has nearly a dozen professional golfers using the system at his Scottsdale gym. The company line is “EMS creates a greater mind-body connection that carries over to golf swing mechanics and teaches players how to engage and stabilize their body while improving balance, coordination, strength, and power.”

Using the system certainly gives you a good workout that leaves you drained. I would do it again if there was a gym with the system nearby, but there is not one closer than Dallas as yet. If anyone is interested in adding it or becoming a private instructor, get in touch with miha bodytec CEO Brian Dillman at bd@miha-bodytec.us.

One of the highlights of any trip to the PGA Show is an escape to Streamsong Resort to play one of its three outstanding courses, the Red designed by Ben Crenshaw and Bill Coore, Blue by Tom Doak or Black by Gil Hanse and Bill Wagner.

Now there will be four

While we were playing the Blue on Wednesday, the course had a press conference back in Orlando to announce that Crenshaw and Coore are designing a as yet unnamed fourth course, with early routings that incorporate a six- and 12-hole loop as well as a large putting course.

“On Streamsong’s Tenth Anniversary, Ben Crenshaw and I are pleased to announce that we will again be working with our friends at the resort, this time to create a short course within walking distance of the Lodge,” Coore said.

The first tees for the fourth course are a short walk from the Lodge at Streamsong. The course winds through the centuries old native oaks, mine cuts and along the banks of Little Payne Creek. Dramatic elevation changes exist on the land bringing drama, strategy and fun into play throughout.

“Comprised of moss draped oaks, lakes and sand-based landforms, the site for the short course is dramatically gifted for golf; and although smaller in scale and different in character from the Blue, Black and Red Courses, we believe the site has the potential to complement the amazing golf experiences that have made Streamsong one of our nation’s most highly acclaimed golf destinations,” said Coore.

The layout will be designed as a walking course where a full set of clubs will not be required.  This new concept will allow guests to play more quickly than a larger or longer 18-hole course and without specified tee markers or a score relative to par. Early routings on the roughly 100 acre site include holes ranging from 70 to nearly 300 yards.

Chatting with Davids in the absence of Goliaths

One common theme from both pros and those who bought booths at this year’s show was how much more relaxed and productive their meetings were without the streams of people normally wedged in between booths.

Scott Morrison, co-founder of the new cotton-based clothing line Radmor Golf, said he had a fantastic show showing off the line of sustainable all-cotton shirts and pants, made to use less polyester, less synthetics of any type and bio-degrade in a matter of months once their use life is over.

Morrison is a veteran of apparel companies, having started three previously. He has never had a product he believes in more and trying to bring the sustainability appeal to golf apparel has been a challenge but one well worth it, he said at the show.

Here’s just a bit from an entire chapter on the subject on the company website, www.radmorgolf.com.

“The future of sustainability is a circular ecosystem, where you eliminate waste and reduce, reuse, recycle, and reproduce. The world is still a long way from being circular, so we’ve focused our energy eliminating the use of single-use plastics in everything from polybags to hangtags. Our shipping bags are designed to be used more than once and are completely biodegradable and compostable, while our hangtags are made from recycled paper, and are designed to be used as a ball marker and practice cup. Even our garment labels are made from recycled materials.”

We give Morrison a thumbs up for believing golfers can be environmentally conscious.

Industry analyst Jim Koppenhaver, producer of the Pellucid Report, has had to overcome his tendency to be naturally pessimistic about the future of the golf industry.

For three years now and none more than this year, his annual State of the Industry presentation at the PGA Merchandise Show has been a barrage of good news.

This year, Koppenhaver told his in-person and online audience that rounds bounced back to over 515 million in 2021, up 85 million over the past two years and the most since 2000. The number of golfers is also up to close to 25 million after dipping below 22 million.

A main focus for both Pellucid and the National Golf Foundation, which had a series of presentations at the show, is how does the industry hold on to the new and resumed golfers when and if all previous entertainment options are fully reopened post the pandemic.

The thinking is that many golfers who tried the game at the height of Tiger Wood’s popularity suddenly discovered, “Holy smokes, this game is hard,” and quit just as rapidly as they had picked it up.

The challenge this time for the pros specifically and the industry in general is keeping golfers engaged long enough that they can become satisfied enough with their game to appreciate a four-hour walk (or ride) outdoors with their friends.

Pat McCrate, director of golf at LaFortune Park in Tulsa, said it’s key for the industry to do all it can to help players improve, but mostly to be welcoming of all golfers.

One his daughters is “a Covid golfer,” one who took up the game during the pandemic and is now an enthusiast. While some new golfers are grinding out a score, many others are in it to have four hours of fun with friends, and it may involve music, beer or other relaxation aids.

“You wouldn’t believe how much weed residue we find,” McCrate said. “Even from the senior crowd.”

Today’s senior golfers certainly seem more willing to embrace or at least tolerate the younger golfers and their interests in video, music, social media and stimulants than a previous no-nonsense generation may have. Most of today’s senior golfers grew up in the 1960s and 1970s, not exactly puritanical eras.

“You don’t see people barking at them to tuck in their shirt or griping because they don’t know all the etiquette yet,” McCrate said. “There’s much more of a melting pot concept and a realization we’re all in this together for the good of the game.”