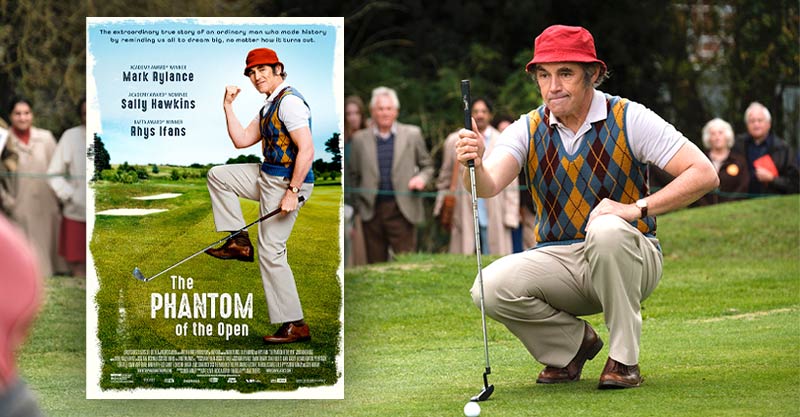 If you no longer marvel at the latest Avenger flick, we may have something more to your liking. In June, “Phantom of the Open” – a heartwarming, golf-theme movie – will arrive in theaters in Oklahoma.  The stars aren’t named Tiger, Rory, DJ or Scottie.  They are portrayed by Oscars winner Mark Rylance and Golden Globes winner Sally Hawkins.

Maurice Flitcroft (Rylance) is a life-long dreamer. Things have never been easy for the working-class family man, but along the way he’s tried his hand at everything from writing and painting to high-diving and songwriting.  His philosophy in life is simple: follow your dreams – something he encourages everyone around him to do, as well.

When 1976 arrives, Maurice, with three adult sons and his loving wife Jean by his side, is staring down the barrel of unemployment as the ship building industry becomes nationalized.  Facing an uncertain future, inspiration strikes him one day … in the form of a golf club.

With encouragement from Jean, he applies to enter the Open Golf Championship as a professional. The only drawback of Maurice’s plan is that’s he’s never played a round of golf in his life.  With pluckiness, optimism and his twin sons – who happen to be champion disco dancers – rallying alongside him, Maurice pulls off a series of stunning, hilarious, and heart-warming attempts to compete at the highest level of professional golf.

All came without success and much to the annoyance of the elitist golfing community.  Notwithstanding his efforts delighted fans worldwide where his exploits became folklore. At the 1976 Open Championship qualifying round at Formby, Flitcroft made history by shooting 121, 49 over par and the worst score ever in Open history (a record that still stands today and will probably never be broken).  He was 46 at the time and playing his first round of golf with a set of cheap mail-order golf clubs packed into his imitation-leather red golf bag.

The British press went wild for Maurice’s story, but golf’s governing body The Royal & Ancient, tried to ban him from ever playing again.  Maurice didn’t give up and, over the next two decades, he tried, tried and tried again to qualify for the Open in increasingly bizarre ways.

He continued to enter the Open under pseudonyms such as Gene Pacecki, Gerald Hoppy, James Beau Jolly, Arnold Palmtree and Count Manfred Von Hoffmenstal, among others, sometimes employing elaborate disguises such as fake moustaches, wigs and a deer stalker hat. His golf never improved to professional level, but he was determined to pursue his passion and he last played the Open in 1990.

There’s more to the story, like Maurice’s warm relationship with Jean (Hawkins) and his three sons, and his family trip to America to be honored as “the world’s worst golfer.”

Keep an eye out on your local theater listings for this one.