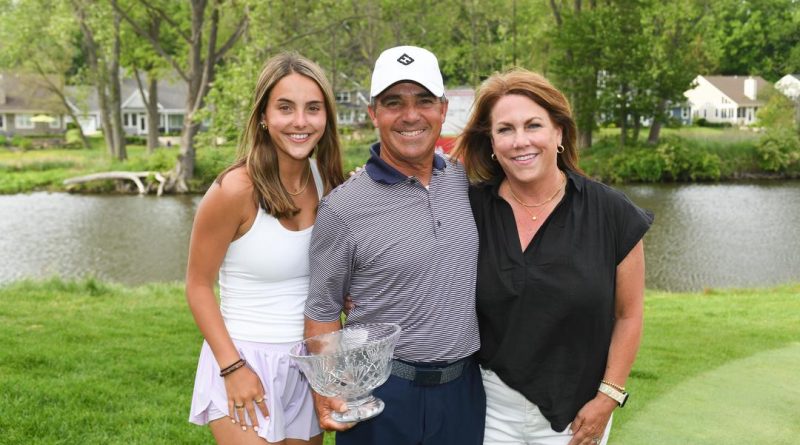 Above, Tracy Phillips with wife Suzie and daughter Samantha after finishing as low club professional in the 2022 Kitchenaid Senior PGA Championship.

Steven Alker, a 50-year-old from New Zealand who never won on the PGA Tour, stormed from four shots back to start the day to win the Senior PGA Championship on Sunday at The Golf Club at Harbor Shores.

Alker used nine birdies to fire an 8-under 63 for a three-shot triumph in the Champions Tour’s second major of the season.

Tracy Phillips of Tulsa was the story of the week in Oklahoma, however. The 59-year-old, who teaches at the learning center at Cedar Ridge Country Club named for his father Buddy as well as having a stable of private students, finished tied for 17th and was by far the low PGA club pro of the 39 who began the tournament. Seven made the cut, including Tim Fleming, director of golf at Oklahoma City Golf & Country Club.

Phillips finished off a magical week with a round of 1-over 72 to finish at 5-under. He shot rounds of 69-68-70 the first three days and was never out of contention until making two bogeys early in his final round Sunday. He battled back to get to 7-under with birdies on holes 5, 6, 9 and 10 but two late bogeys resulted in his first round over par in the event.

“It was a great week,” Phillips said Sunday night. “I was really comfortable and never felt too nervous. I was putting well and made a lot of good putts to sustain momentum, which you have to do anytime you’re playing in a major championship.”

Alternating caddie duties for Phillips were friends Pat Tubach and Rick Reed, the former general manager and head professional at The Oaks Country Club, respectively. It was the third time in this event for Phillips, having previously made the cut in 2014 at Harbor Shores and missed the cut in 2015 at French Lick Resort.

Looking back at the last month, Phillips said it was probably fortunate that he didn’t qualify to play in the 2022 PGA Championship at Southern Hills, where he missed out by two shots with two bad holes in his final round at the PGA Professional Championship at Barton Creek Resort in Austin. He did get to play one round at Southern Hills as a marker in the first group on Saturday.

“I think it would have played very difficult and very tough and maybe it was better for me coming up here not to have qualified,” Phillips said. “I came in playing well and with confidence and just carried that over.”

The low Oklahoman in the field was Oak Tree member Brant Jobe, who tied for eighth at 8 under. Former Oklahoma Sooner Glen Day tied for 39th at 1 over while Fleming finished tied for 66th at 9 over.

Phillips, who over the past year has been playing some of his best golf since coming out of a self-imposed retirement that lasted 20 years, will next play in the U.S. Senior Open June 23-26 at Saucon Valley CC in Bethlehem, Pa. The former All-American at Oklahoma State and No. 1-ranked junior continued to teach but didn’t play competitive golf after losing confidence in his driver while making swing changes at OSU.

In winning, Alker held off World Golf Hall of Famer Bernhard Langer, who started the day two shots back and tied for the lead with a front-nine 32, then took the lead by one at No. 10. But, stunningly, Langer — seeking a record 12th senior major (he owns the record at 11) and a 44th Champions Tour win (Hale Irwin is tops all-time, at 45) — made three straight bogeys on the back nine, at Nos. 12-14, to fall out of contention.