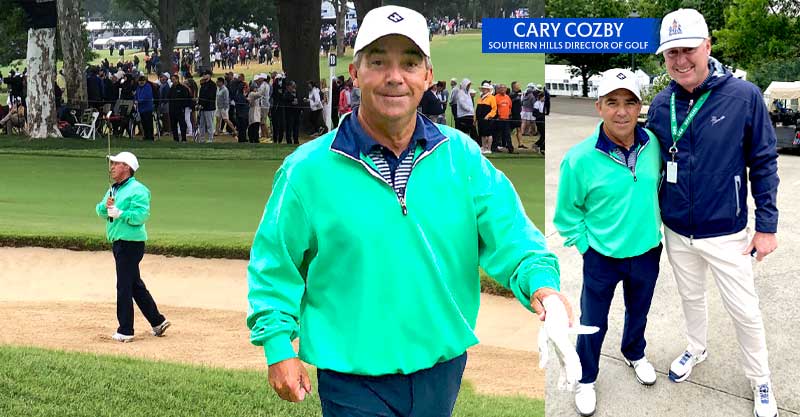 Tracy Phillips was able to experience what playing Southern Hills at nearly 7,500 yards was like after all.

After receiving a call from Southern Hills Director of Golf Cary Cozby Friday night while attending his daughter’s high school graduation,  Phillips, teaching professional at Cedar Ridge CC, served as a marker for Brian Harmon, who was first off Saturday morning and would have played by himself otherwise.

Cozby will serve the same function in Sunday’s final round if no one drops out. It is a nice symbolic gesture for both well-respected club professionals to experience playing in this championship. Their fathers Buddy Phillips and Jerry Cozby, both legends who combined to serve more than 80 years combined as professionals at Cedar Ridge Country Club and Hillcrest Country Club, respectively, both passed away within two days of each other in August of 2020.

Phillips, who will leave Sunday morning to play in next week’s Senior PGA Championship at Benton Harbor in Harbor Shores, Mich., actually had a great chance to be one of the 20 PGA club professionals to earn a spot in the field. He was two shots inside the cut line at the PGA Professional Championship with 11 holes to play in the 72-hole qualifier at Omni Barton Creek Resort in Austin, Texas, but had two bad holes coming in that resulted in him finishing two shots outside the cut line.

Playing with Harmon and basically making sure he played quickly and stayed out his way, Phillips shot 75, including birdies on holes 3, 10 and 17. He was actually ahead of Harmon, who shot 71, but a pair of double bogeys on 15 and 18 and a bogey on 16 inflated his score late.

“It was a wonderful experience,” Phillips said. “Cary called and said, our pops are looking down on us. Brian was great to play with. He’s someone of about my own stature, so I found somebody my own size to play with, but he still drove it 40 or 50 yards past me. That was quite the experience to see how far these guys hit it.

“Overall I’m comfortable with where my game is. I’d like to get on a course that’s closer to 7,000 yards than 7,500. It will suit my game a little better. It would have been really tough out here Thursday and Friday.”

Next week will be Phillips’ second crack at the Senior PGA Championship at Benton Harbor, having played there in 2014. He is optimistic he can make a good run.

“I’m looking forward to it. I like the golf course, it suits me very well. Greens are very undulating and sloping. The way I’ve been driving the ball and hitting the ball, I’m confident. Hopefully I don’t have to hit a lot of hybrids and 3-woods into the greens like I did today.”