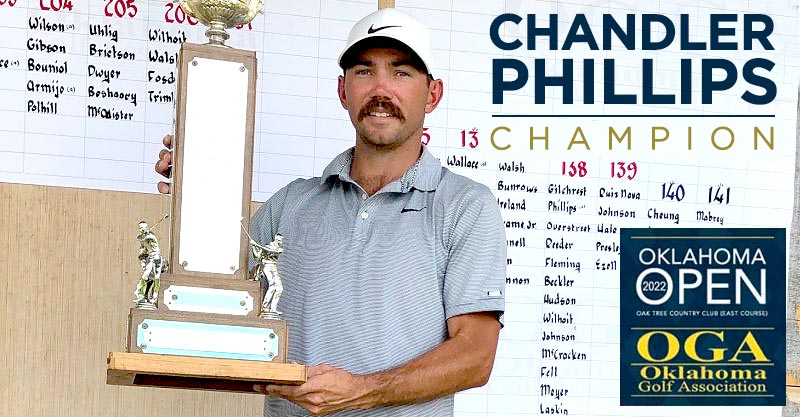 For the talented golfers who grind out an existence on golf’s professional mini-tour circuits, there has been a lot of bemusement as they’ve watched the elites of the game divvy up millions in the ongoing battle between the PGA Tour and LIV Golf.

The one bright spot for players such as Chandler Phillips, who shot rounds of 65-63-67 for a 15-under 195 total to pocket $10,000 for winning the Oklahoma Open at Oak Tree Country Club?

“The only good thing for us is that spots are opening up that have to get filled,” said Chandler. “That means more opportunities.”

Chandler took full advantage of his opportunity and also the misfortune of his friend and playing companion Preston Stanley in Saturday’s final round.

Stanley, the son of former University of Oklahoma golfer Jim Stanley and a 2015 graduate of Houston Baptist, had poured in seven birdies to erase a three-shot deficit to Chandler to start the round, the final one of which on the par-4 15th moved him to 16-under, one shot ahead of Phillips.

After both players made par on 16, Stanley pulled his tee shot left into an unplayable lie on the par-3 17th over water, leading to a double bogey which dropped him a shot behind. Then he pulled his drive on the par-4 18th left and out-of-bounds. The resultant triple bogey dropped him into a tie for third at 11-under with former Oklahoma State golfer Trent Whitekiller of Fort Smith, Ark., who closed with the day’s best round, a 6-under 64.

“Not really how you want to win,” said Phillips, a 2019 Texas A&M graduate who is the second-leading money winner on the 2022 All Pro Tour (APT). “I kind of got lucky. Preston was playing great, better than anyone on the course for 16 holes. I know he wasn’t trying to flirt with the left side. That’s just golf. And I can’t believe what happened to his drive on 18. We all thought it was fine.

“I love winning, but would rather do it in a different way. I play with Preston a lot and respect him so much.”

There have been many similar disasters late in the final round for leaders in the Oklahoma Open. Sam Stevens was comfortably ahead just last year until taking a triple-bogey on the par-3 13th. Chase Hanna led the 2020 Oklahoma Open by a shot standing on the 18th tee box, but hit his drive out-of-bounds leading to a triple bogey and a two-shot loss.

It was the first win for Phillips since a second-stage event of PGA Tour Qualifying School last year. He has finished second three times this summer on the APT. He hopes the momentum carries him through the final stage this year when he goes back in search of his Korn Ferry Tour card.

First-round leader Christian Jalomo of Richmond, Texas, moved into second place after Stanley’s misfortunes, three shots back of Phillips at 12-under after rounds of 62-69-67.

Griffen Locke of Joplin, Mo., Logan Smith of La Plata, Mo., and Joel Thelan of Hudson Oaks, Texas, tied for third at 9-under.

Oral Roberts University golfer Lane Wallace of Yukon was low amateur with rounds of 70-66-67 to finish at 8-under.

With the East Course playing firm and fast, the young bombers turned it into mostly a pitch and putt. Phillips hit wedge or less into most of the par-4s with the exception of one hole in which he miss-hit his tee shot. Same for Stanley. There were even wedges hit on the second shot on the 562-yard par-5 12th, including a beauty to about 3-feet for eagle by newly turned professional Brock Polhill of Edmond.

“You were getting 40 or 50 yards of roll on some of the drives, so it’s not surprising that it played short,” Stanley said.

Stanley said he pulled the wrong club on the 207-yard 17th.

“I tried to hit an easy 5-iron and should have just pulled the 6-iron and ripped it,” he said. “It started a little left and then just went left with the wind. That’s golf.”

Stanley, who hit brilliant wedge shots consistently in making the seven birdies, said he left college with a 5-year plan to try to make it to the next level.

“Then I started playing some good golf toward the end of it, so here I am in year seven,” he said. “I am confident I can make it. The way I’m hitting it and putting, absolutely I believe I can make it through.”

It was the final official OGA event for retiring executive director Mark Felder, who unfortunately had to leave with an illness after getting the final groups started.