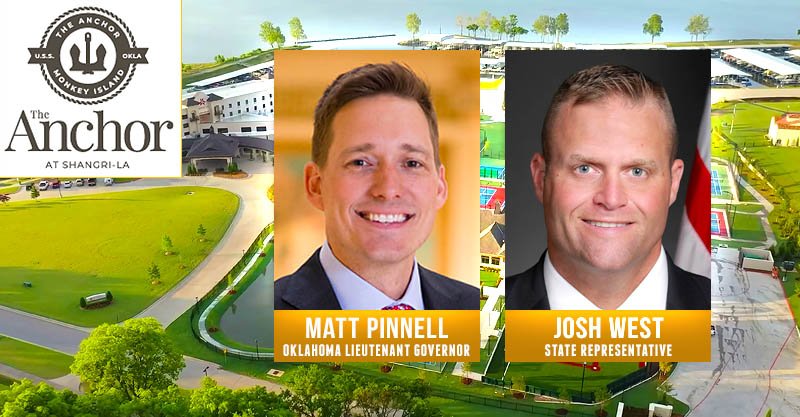 Pinnell will keynote the official Grand Opening of the $12 million activity park. He was also the featured speaker at groundbreaking ceremonies for the construction of the facility on a chilly Valentine’s Day in 2020. Sixteen months later, he will formally unveil the new facility. As Lieutenant Governor, Pinnell also serves as Chairman of the Oklahoma Tourism & Recreation Commission and as Secretary of Tourism, Wildlife, and Heritage on Governor Kevin Stitt’s cabinet. In that role, he leads the state’s efforts to promote tourism, the third largest industry in Oklahoma. Pinnell led the successful effort to rebrand the State of Oklahoma, a component of the overall effort to retain and recruit more jobs to the State of Oklahoma. Pinnell also currently serves on the Department of Commerce Executive Committee, focusing on small business growth, entrepreneurship, and workforce development.

Another highlight of the July 2 ceremonies will be the formal dedication by West of the USS Oklahoma Memorial honoring the 429 WWII veterans who were casualties aboard the famed battleship when it was capsized during the attack on Pearl Harbor in 1941. The names of all 429 sailors and marines who perished aboard the vessel are included in the monument, which features a striking replica of one of the 20,000 lb. anchors from the USS Oklahoma. The monument is the inspiration for the name of the new activity park – The Anchor.

Shangri-La Resort is included in the district represented by Representative West in the Oklahoma legislature, where he serves as majority leader of the Oklahoma House of Representatives and Chairman of the Tourism Committee. West joined the United States Army in 1996, he was deployed multiple times, including combat deployments to Afghanistan and Iraq. On October 16, 2003, West was critically wounded in a firefight in Karbala, Iraq. He was shot multiple times in both thighs, stomach and suffered a traumatic brain injury. During this firefight, his Battalion Commander, Lieutenant Colonel Kim Orlando was killed along with Sergeant Joseph Bellavia and Corporal Sean Grilley. For his actions that night in Iraq, West earned the Purple Heart and Bronze Star with “V” device for Valor. Those honors are included among seventeen military awards and decorations honoring his service, including a Meritorious Service Medal and an Army Commendation Medal (V). In August of 2019, West was awarded the inaugural Military Police Order of the Marechaussee Steel Award at a ceremony at Fort Leonard Wood, Missouri.

Best known historically for its 27-holes of Championship golf and a luxury 119-room resort hotel and conference center, Shangri-La is continuing to expand amenities to provide the ultimate year-round destination with the opening of the new Activity Park.

The Activity Park construction brings the total investment of the resort facility to almost $90 million since Eddy Gibbs purchased the property in 2010. The addition of facilities at “The Anchor” will enable the resort to offer corporations more indoor space after their meeting sessions for team building activities, entertainment, and extreme year-round enjoyment without being impacted by weather.

“We are expanding the recreational offerings to add to our popular championship golf course,” said Shangri-La President & CEO Barry Willingham. “We are also focused on providing more indoor entertainment options for our members and our hotel guests to make Shangri-La an attractive year-round destination for business groups and families alike.”

Grand Opening and Dedication festivities at The Anchor at 1:00 p.m. Friday, July 2, will be hosted by Shangri-La Resort owner Eddy Gibbs, Executive Chairman Jason Sheffield, President & CEO Barry Willingham, and CFO Nancy Brandwein, along with the entire Shangri-La team. Festivities will continue throughout the holiday weekend with Monkey Island Fireworks scheduled at the resort Saturday evening, July 3. The general public is invited to attend all the festivities.