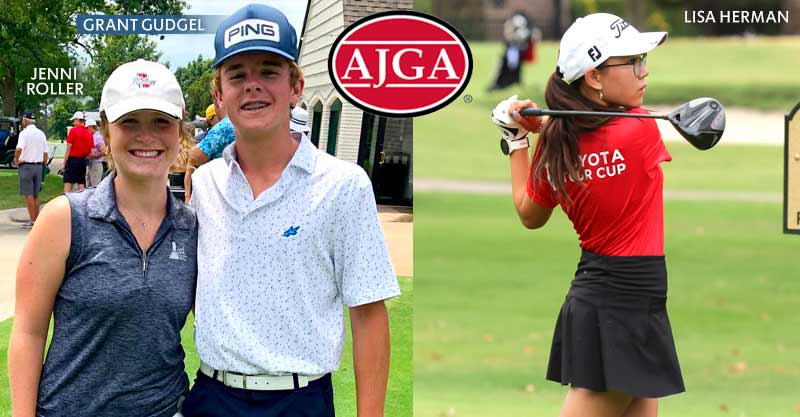 Two young golfers were thrilled with a tie for second, the other not so much. That may have to do with the weight of expectations each carried into the final round of the Gateway First Bank Tulsa Junior Presented by Bo Van Pelt Wednesday at The Oaks Country Club.

For Grant Gudgel of Stillwater, it’s been a heady two weeks. He gave a verbal commitment to play his collegiate golf at Oklahoma State, then played three solid rounds in the first of four consecutive AJGA events in which he will compete before returning to Stillwater High School this fall.

Gudgel, who won the Class 6A state championship at Jimmie Austin University of Oklahoma Golf Course this spring, rolled in a 30-foot birdie putt from off the back of the green on the 18th hole to finish at 2-under 69 for the round and 3-under for the 54-hole event. He tied for second with Ben Paylor of The Woodlands, Texas and Asher Whitaker of Wichita, three shots behind Michael Riebe of Encinitas, Calif., who closed with a 5-under 66.

“It’s always been my dream to play for Oklahoma State,” Gudgel said. “I started talking with Coach (Alan) Bratton and Coach (Donnie ) Darr back in June when they first allowed to make contact and they let me know they wanted me to stay home in Stillwater. It’s just amazing.”

In the girls division, Jenni Roller was not quite as ecstatic after giving up a four-shot lead and finishing in a tie for second, four shots behind Eliana Saga of Stevenson Ranch, Calif.

Saga, who will just be in eighth grade this fall, closed with a 4-under 67 to finish at 3-under. Roller battled a balky putter all day, missing numerous putts from inside 10 feet that she would normally make in shooting 75 to fall into a tie for second with  Lisa Herman, who recently moved from California to Jenks and will be a freshman in the fall. Herman closed with an even-par 71 to tie Roller at 1-over. Herman rolled in a long birdie putt on the final hole, while Roller missed from just 4 feet above the hole.

Roller will compete in the PGA Junior Championship next week, the final event of an illustrious junior career before beginning her collegiate career at the University of Tulsa this fall. She could be forgiven if she was pressing a bit Thursday wanting to win this event that her mother Maggie Roller – the director of instruction at Cedar Ridge Country Club – has worked hard to organize and host the past five years, this being the final one unless someone else steps up to fill the void as tournament organizer.

Other Oklahomans also played well in the event. Collin Bond of Norman shot three consecutive rounds of even-par 71 and tied for seventh. Ben Lathrop of Oklahoma City tied for ninth at 1-over. Also in the top 15 were Sam Morris of Jenks at 2 over, Preston Albee of Choctaw 3 over and Drew Mabrey of Tulsa at 4 over.The next best finish for an Oklahoma girl was Evyn Cannon of Edmond, tied for 16th at 17 over.