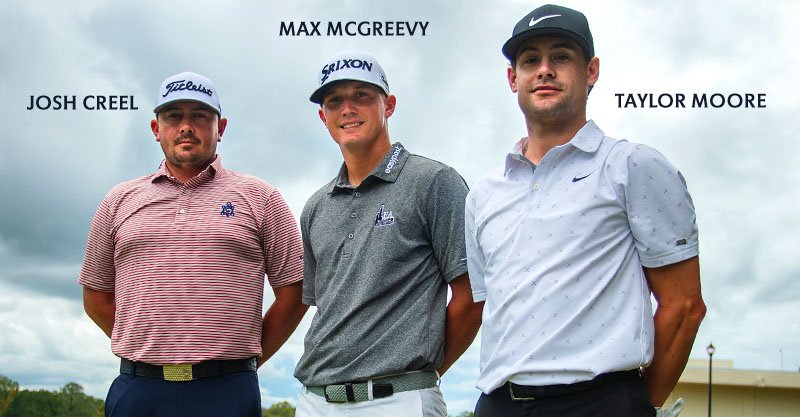 The Oklahoma party on the PGA Tour just keeps getting bigger.

They have each already made their tour debuts in the first event at the Fortinet Championship in Napa., Calif., and though none made the cut, it was a memorable moment for each.

Let’s take a look at how each arrived at this juncture.

Moore, who is on the tour just two years after a life-threatening medical crisis, said the experience was “Sick!”

“My mom and dad came out. I wasn’t nervous, just excited that they were able to come watch. It was also awesome having Josh, Max and Quade (Cummins of Weatherford, who Monday qualified) there as well. Quade actually came up to me and said how much he used to look up to me during junior golf in Oklahoma, and that meant a lot.”

Moore had a different type of “sick” experience in 2019 while he was on the Korn Ferry Tour. He was in Scottsdale, Ariz., for a week with former Oklahoma State golfer Kevin Dougherty playing Silver Leaf Golf Club. Moore was supposed to get on a flight the next day. However that night, he got what he thought was food poisoning, so he drove to a local ER.

At first, the nurses thought Moore had appendicitis, but the CT scan revealed that his right lung was 50 percent collapsed due to a genetic condition.

“The doctor told me that I am extremely lucky I didn’t get on that flight back home, because I could have been in critical condition or even worse,” Moore said.

Moore, a Class 6A high school champion at Edmond Memorial who starred in college at Arkansas and now is the title sponsor of the OGA State Junior Championship, missed three months on the Korn Ferry Tour and that led to him not earning enough points to finish in the top 75. However, KFT gave him 10 starts the next year because of the circumstances.

In early 2020, the tour’s schedule was interrupted for three months due to COVID.

“COVID might have been a blessing in disguise because I still wasn’t fully healthy,” Moore said. “My chest was still numb and I was mid-60s on the points list.

Moore also hired a mental coach during this time, Sarah Taylor, and says that’s the best thing he ever did. She helps him gain perspective and have structure and routine.

After playing poorly in his first four events of the season and really wasn’t striking it well, Moore called a familiar voice from his childhood, Kickingbird Golf Course director of golf and close family friend Brian Soerensen, on a Saturday morning and said “when can we meet? I will drive anywhere!” They met on Sunday at Jimmie Austin in Norman, worked for 3-4 hours and something finally clicked.

In July, Moore won his first Korn Ferry Event in Springfield, Ill., at the Memorial Health Championship. He shot a course-record 60 in the third round and a final-round 65 after opening with a pair of 66s for his first ever win on that tour. Moore finished second the next week and wound up sixth on the money list, earning a spot on the PGA Tour.

When he was 7, Moore was more likely to tell you he wanted to be a baseball major leaguer rather than a pro golfer. His dad, Rod, not only played, but went on to coach baseball at the high school and collegiate levels. Taylor’s love for golf came from when Rod and his baseball buddies would let Taylor tag along with them to the golf course. When Taylor turned 8, the Moore family moved to Edmond and that’s when his love for golf turned into an obsession with winning.

At Edmond Memorial, Moore was coached by Josh Fosdick, who later went on to coach at UCO. When you ask him about his high school days, he is less likely to tell you about his individual state title at Cedar Ridge in 2011 and more likely to bring up the great memories he made with Fosdick and coach Scott MacDonald along with teammates Connor Kurtz and Bobby Todd.

Moore collegiately played at Arkansas, which was his father’s alma mater.

“Arkansas is in my blood,” Moore said.

After winning SEC freshman of the year honors in 2013, coach Brad McMakin and Taylor decided to make some pretty drastic swing changes to start preparing for the PGA Tour. As a senior, he won his first collegiate event and received All-American honors for the second year in a row.

“The game of golf isn’t all how you hit it, it’s how you handle yourself and how you prepare. College was the time for me to grow in other aspects as well as golf,” Moore said. “McMakin is like a second father to me and still helps me to this day. He was a great coach at Lamar, and now Arkansas, and is very good at grooming players for the PGA Tour.”

Just as Moore had a lengthy journey from college to the PGA Tour, so did Creel.

Creel is known to the other pros at Oak Tree National as one of the toughest competitors and definitely the one guy you would want to have a putt on 18 to win your local money game. This clutch gene was never more evident than in the Korn Ferry finals where he finished 13th and earned his PGA Tour card. This also makes him only the second ever PGA Tour member from Wyoming.

“I just think it’s pretty cool that a small-town kid from Wyoming is now on the Big Show,” Creel said.

Born and raised in Cheyenne, Creel was offered to play college golf at Colorado, but chose Central Oklahoma instead due to “the warmer weather and the fact that Kickingbird has a lighted driving range,” he said with a laugh.

Creel credits the instruction he received at UCO from Dax Johnston and Pat Bates for being where he is today. In 2012, Creel received the Arnold Palmer Award for NCAA DII player of the year after winning the individual national title. After college, he decided to stay in Edmond, living there with his wife, Alex.

After joining PGA Tour Canada in 2014, it was a long path to the PGA Tour. In 2018, he won three events on the APT Tour and was the player of the year. Creel says that he “learned how to win on the mini-tours.” His love for the game has never wavered, his ability to fund his chase was often in peril.

Creel received his break in 2019 when he became fully exempt on the KFT and he got his first win on that tour at the Utah Championship in August as he made a 30-foot birdie putt on the 72nd hole for a two-shot victory. Two years earlier, he lost in a playoff in that tournament.

It didn’t take quite as long after college for McGreevy to make his PGA Tour debut. McGreevy, introduced to golf at the age of 4 at Twin Hills Country Club, won consecutive Class 6A state titles at Edmond Santa Fe before becoming a staple on the University of Oklahoma’s NCAA championship team in 2017.

His success at Santa Fe and in OJGT tournaments caught the interest of OU coach Ryan Hybl.

“We are both bulldogs mentally, and I really related to him.” McGreevy said.  At OU, McGreevy was selected twice as an All-American on the course as well as academically.

Before OU’s NCAA title, McGreevy finished second in the 2017 PGA Tour Canada Qualifying School, with his dad on the bag, which guaranteed a summer schedule. McGreevy said qualifying for Canada was huge for his development as a professional. He went on to finish 17th on the money list in Canada.

In 2018, he had two sponsor’s exemptions into KFT events and made the cut in both, which allowed him to play 16 tournaments, making seven cuts. Although he only finished 161st on the money list for 2018, McGreevy said the experience he gained was extremely valuable, learning to “not get psyched out by KFT leaderboards, not pay attention to everyone else, and to clear my head and settle down.”

In 2019, former college teammate Charlie Saxon convinced McGreevy to go to PGA Tour China with him. McGreevy went on to play in 13 tournaments without missing a cut in China, along with nine top-10s. He had one win, and only finished outside the top 20 twice. This earned him PGA Tour China Player of the Year, and also a return to the KFT.

His break through came when he least expected it at the Price Cutter Charity Championship last year in Springfield, Mo.

McGreevy traveled to Korn Ferry events with his former college teammate Grant Hirschman. Before the tournament that week, Hirschman tested positive for COVID. This left McGreevy with a decision to either withdraw due to contact tracing and receive compensation from the Tour, or forfeit the compensation and decide to play and go through extensive COVID testing throughout the week.

He chose the latter option and played that week. Despite a history of struggling in Korn Ferry opening rounds, he got off to the best start of his career and was only five shots back heading into the final round.

“I just kept putting myself behind the eight-ball in previous tournaments, but sometimes it feels easy and that week I got off to a great start and the cards aligned on Sunday for me to get the win.”

McGreevy finished at 21-under for his first KFT victory. He then finished solo second at the Club Car Championship and officially sealed his PGA Tour card with a third-place finish at the BMW Pro-Am.

His advice to aspiring PGA Tour pros is to “continue to grow and get better. You don’t need to be a superstar at a young age, just figure out the tools to grind it out. And find friends that push you to be better every day.”

Oklahoma Golf Association Executive Director Mark Felder is continually amazed at the levels of golf being reached by players he’s watched play OGA and Oklahoma Junior Golf Tour events since boyhood and he’s especially grateful to Moore for his support in raising the level of the OGA Junior.

“It’s absolutely amazing what these guys are doing,” Felder said. “There’s three more on the PGA Tour and more are on the way with Quade, Austin (Eckroat) and others. It’s incredible.”