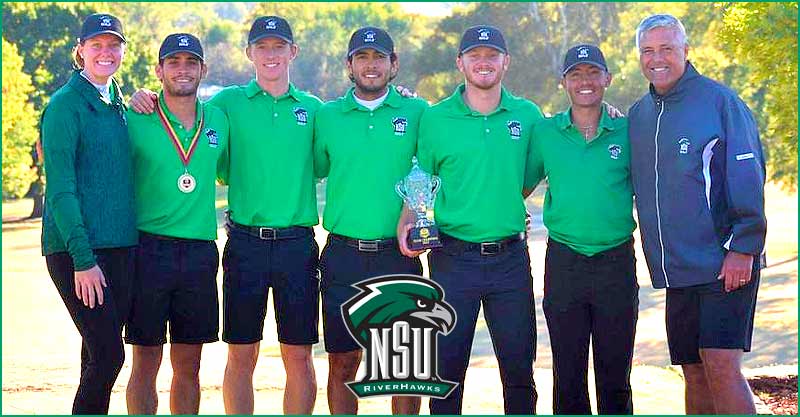 TULSA – Northeastern State edged Southwestern Oklahoma State in a playoff to win its second event of the fall, capturing the Tulsa Cup at the Club at Indian Springs. Connor Boydston of SWOSU won the individual title, leading the Bulldogs to their best finish of the fall season.

The RiverHawks fired off the low round Tuesday (291), and it propelled them three spots on the leaderboard, where they took a late one-stroke advantage.  Southwestern would pull even with NSU on the final hole, with both teams shooting a 590 two-round score.

NSU would get birdies from Carlos Gomez and Brett Wilcoxen in the tiebreaker to shoot 2-under while the Bulldogs came in at even-par.

“Gutsy, gritty, and courageous rally on the final five holes today when we knew we had a chance,” said head coach Scott Varner.  “This is our fourth win in the last ten tournaments, championship character breeds champions.”

Gabe Replogle claimed a career-best finish and was tied for third place overall with a 143 (72-71).  The junior was named to the All-Tournament team and was the best finisher among MIAA players.

Fall 2003 is the most recent time an NSU men’s golf team claimed two team championships in the first half of the season.

Henderson State, ranked No. 10 in Division II in Golfstat currently, finished third overall and the University of Central Oklahoma was fourth.

Boydston’s individual championship is the best men’s solo finish SWOSU has had this fall, topping Anders Strand’s Ichabod Invitational third-place performance. It is the first time a Bulldog has sat atop a tournament field since Kason Cook won the MSSU Invitational back in 2019.

Boydston shot back-to-back 3-under 69s to win by four strokes. He carded five birdies in each of his rounds to lead the field which included three consecutive on holes 10-12 in Monday’s opening round.

Host Rogers State placed seventh, led by Jack Roche’s tie for 12th at 149. Ty Nicar was tied for 19th at 151, Elliot Han Monteremal tied for 41st at 155 along with teammate Tyler Cornwall.