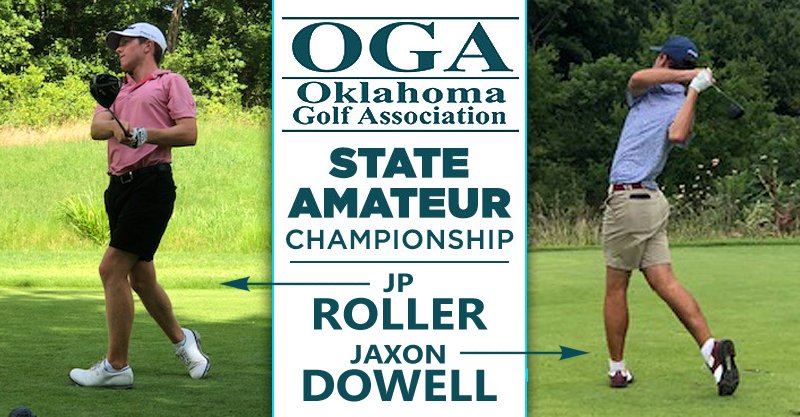 In addition to becoming two of the top junior golfers in the state in the course of their high school careers, JP Roller and Jaxon Dowell have also become fast friends.

If a tournament is in the Tulsa area, Dowell crashes at Roller’s house and vice versa when the events are in Edmond.

On Wednesday morning, one of them will be exiting the Oklahoma Golf Association State Amateur Championship and the other will be moving on. They are paired in an 8:42 a.m. match in the round of 16 after both won two matches Tuesday at The Patriot in Owasso.

Roller, headed to Texas Tech in the fall, was 7-under par in his morning match, a 3 and 1 victory over Dylan Igo of Mustang. He then squared off against one of the state’s best mid-am players, Luke Phillips of Edmond, in the afternoon and the match was tied until Roller was conceded a short birdie putt on the par-3 sixth hole. Phillips lost his tee shot in the woods on the par-4 seventh (their 16th hole) and Roller survived.

Dowell, who soon will join the University of Oklahoma Sooners in the fall, had to go 19 holes to edge Brayden Strickland of Broken Arrow, winning when Strickland hit his second shot on the par-5 10th hole left into tall grasses on the first extra hole. Dowell then watched Zane Heusel of Edmond barely miss a potentially tying birdie putt on the final hole (the par-3 ninth) of their afternoon match for a 1 up victory.

Dowell defeated Roller 1 up three years ago in the Oklahoma Junior Amateur Championshp, which Dowell won in 2019 and Roller won earlier this year. It should be an intriguing match, one of many set up by the opening round at the Patriot, which is in immaculate condition for the tournament.

Defending champion Jordan Wilson of Edmond rolled to a 5 and 3 victory over Colby Cox of Muskogee in the morning, then had to fend off a serious challenge from the talented Jake Hopper of Norman before prevailing with consecutive birdies on the par-5 15th and 16th holes for a 3 and 2 victory.

Wilson will face the powerful Tyler Hunt, one of the few mid-amateurs to survive to the third round. Hunt defeated Max Roberts of Ada 3 and 2 and survived a tough match with William Sides of Tulsa 2 and 1.

One player who didn’t see much of The Patriot Tuesday was Christian McAllister of Oklahoma City. He defeated Mike Hearn of Yukon 5 and 4 and Craig Sanders of Edmond 6 and 5. He’ll face Eric Schuessler of Stillwater in the third round. Schuessler and former Stillwater teammate Jack Glenn now of Wichita State both advanced.

The tournament lost two of its top players early. Andrew Goodman, the top qualifier at Bailey Ranch in Owasso, withdrew to play in another amateur event. Then No. 2 seed Brock Polhill, who shot a course record-tying 61 in the qualifier at Lincoln Park in Oklahoma City, lost 3 and 1 in the first round to Jack Gero of Tulsa. Gero went on to defeat Ross Taylor of Edmond 4 and 2 in the second round.

It also lost one of it’s best story lines when the father-son duo of Scott Mabrey and son Drew Mabrey were both eliminated before a potential match. Drew lost in 21 holes to William Falleur of Muskogee, while Scott made it to the second round before just missing a potential match-tying putt on the 18th hole in a 1 up loss to Charlie Jackson of Norman.

Both the round of 16 and the quarterfinals will be played Wednesday, with the semifinals and finals on Thursday. See all Wednesday’s pairings here.