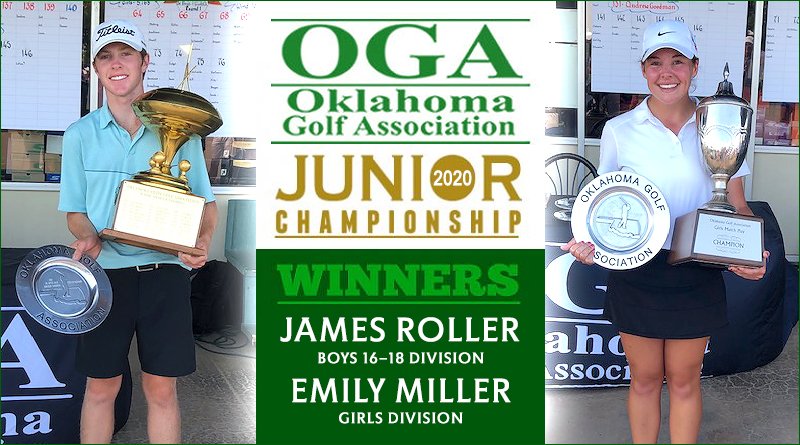 In their final opportunities, James Roller and Emily Miller erased years of frustration with victories in the Oklahoma Golf Association Junior Boys and Girls Championship at Kickingbird Golf Course in Edmond.

Roller accomplished his goal by going through two of the top juniors in the state. He defeated Jordan Wilson of Edmond 1 up in the semifinals after Wilson missed a final chance to tie when his 20-footer for birdie slid by on the 18th hole. Then he took down the tournament’s hottest player, Andrew Goodman of Norman, 4 and 2 in the championship match.

Miller, a member of two state championship teams at Edmond North and headed to the University of Central Oklahoma this fall, is such a popular figure in junior golf circles that even her opponent in the finals, Maddi Kamas of Kingfisher, could not stay disappointed for long.

“She’s just an amazing person, one I really look up to,” Kamas said after her 2 and 1 defeat in the finals marked the first time in four tournaments (including the OGA Junior Stroke Play she won Tuesday) this spring that she did not come out on top. “I couldn’t be happier for her.”

Miller had earlier defeated Jenni Roller, younger sister of James, in the semifinals, eliminating the chance of a first brother-sister championship combo. Kamas advanced with a 1 up victory over Rachel Nelke of Pocolo.

Kickingbird is Wilson’s home course and she works with head professional Brian Soerensen. Her game has advanced greatly in the past year and she was steady as a rock throughout the four rounds of match play. In addition to the work on her swing, she has benefitted from work with a mental coach and wears a bracelet with a reminder to be “Present, Confident and In Control.”

She was all those things and more, resulting in a victory she called “a dream come true.”

After surviving Wilson, Roller was rewarded with a match against Goodman, who had finished ahead of him the previous year in regionals, Class 3A state championship and this spring at the Oak Tree Junior Classic and earlier this week in the stroke play portion. Goodman was more than 20-under par in rolling through his first matches then ousting defending champion Jaxon Dowell of Edmond 2 and 1 in the semifinals.

Goodman birdied three of the first eight to go 3 up in the morning match, but Dowell responded with an eagle on the par-5 ninth and birdies on holes 10 and 13 to square the match. Goodman responded with birdies on 15, 16 and 17, the last from about 30 feet, to storm into the finals.

In this match, however, it was Roller who made the big shots, starting with an eagle from a bunker in front of the second green to grab an early lead. Goodman bogeyed the par-4 fourth to go two down but got that back quickly, walking in a birdie on the par-4 fifth. Roller recovered his 2-up lead before the turn however, stuffing a 7-iron from 187 yards to 6 feet for an eagle on the ninth.

“That was huge to regain the momentum there,” Roller said. “I had a second shot in the morning that was just a bit shorter and tried to hit 8-iron and was short, so I just hit the 7 and made a good swing.”

Goodman drove left into trouble and bogeyed the par-4 10th to fall three down. He did win the par-5 12th with a birdie, but gave it back when his tee shot flew over the par-3 14th. Roller held him at bay with a nice up-and-down for birdie on the par-5 15th where Goodman also made birdie. Then Roller ended the match by stuffing his tee shot on the 170-yard 16th within 5 feet.

“James played well and I didn’t match him,” Goodman said. “I’m thinking on the back nine, man he hasn’t made a birdie yet and I’m a couple down. Of course two eagles will do it.”

“I played well and stayed steady in both matches,” said Roller, bound for Texas Tech in the fall. Roller had lost in the first round of match play a year ago to Eric Schuessler of Stillwater, who also eliminated Goodman in the second round.

Both Roller and Goodman will compete in a top amateur event in North Carolina next week before returning to the state for the Oklahoma Junior Masters June 15 at Southern Hills Country Club, where they will be joined by the other semifinalists and all four of the girls semifinalists in an elite field of just over 50 players.

Ryder Cowan of Edmond won the boys 14-15 age group with a 2 up victory over Bryant Polhill of Edmond. Cowan defeated Parker Smith of Sand Springs 3 and 2 in the semifinals while Polhill advanced with a 3 and 2 victory over Sam Morris of Tulsa.

Korn Ferry Tour golfer Taylor Moore of Edmond again hosted the event, providing sponsor money for tee gifts and other upgrades and putting on a clinic for the players on Sunday evening.