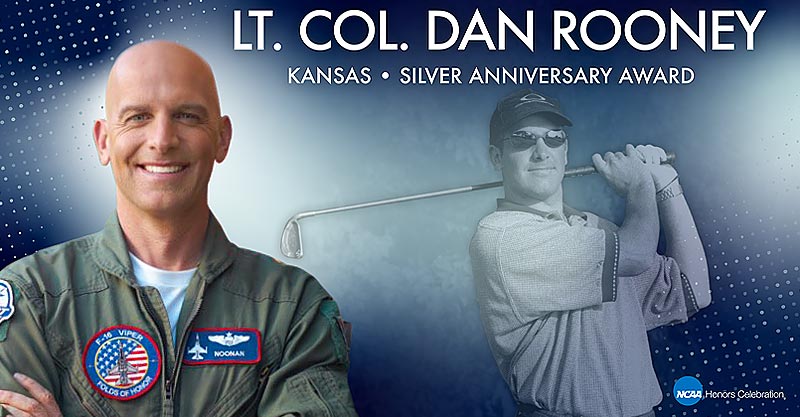 Lt Col Dan Rooney, founder and CEO of Folds of Honor, will be honored tonight at 6 p.m. CST with the NCAA Silver Anniversary Award.

Silver Anniversary honorees will be recognized Wednesday during a virtual Honors Celebration awards show on the NCAA Twitteraccount and on the ESPN app.

Rooney started Folds of Honor, a non-profit foundation, above his garage in Oklahoma in 2007. Its singular mission which has never wavered, is to provide educational scholarships to the spouses and children of wounded or killed military service members.

Also from Kansas, Rooney joins legendary basketball coach John McLendon, who will be posthumously honored as the 2021 TheodoreRoosevelt Award recipient. The “Teddy” is the highest honor the NCAA can confer on an individual. It is named after former PresidentTheodore Roosevelt, whose concern for the conduct of intercollegiate athletics led to the formation of the NCAA in 1906.

“It’s humbling to join the other Silver Anniversary Award recipients and Coach McLendon in being honored by the NCAA,” Rooney said.“I’m thankful for the incredible impact the University of Kansas and the KU golf team has had on my life. I am very blessed to be able topay forward the gift of an education.

“At Folds of Honor, we’re grateful to be able to provide necessary funds to students that deserve and need our help. About 41percent of the 29,000 life-changing scholarships have been given to minority scholars. Education and opportunity are keys to success in this country. Coach McLendon’s legacy reminds us all that we must do our part for equality in America.”

A former collegiate golfer at Kansas, Rooney won the 1995 Kansas Invitational and finished in the top 10 twice at the BorderOlympics. He placed sixth at the 1996 NCAA central regional. He also helped his team to a second-place finish in the Big Eight Championships in 1995 and 5th place at the 1996 NCAA Division I Men’s Golf Championships. He later played professionally on the mini-tours.

Rooney commissioned as an officer in 2000. He is a career fighter pilot and was honored with the Spirit of Attack award as a top graduate of F-16 training and is a two-time recipient of the Top Gun award. As an F-16 fighter pilot (1800 hours), he completed three combat tours of duty in Iraq and is a decorated aviator. His honors include the Air Force Commendation Medal, Air Medal, Anti-terrorism Medal, Combat Readiness Medal and Air Expeditionary Medal. Lt Col Rooney continues to fly the T38 (900 hours) as an aggressor pilot in the 301st Fighter Squadron at Eglin AFB in Destin, Florida.

The only-ever fighter pilot/PGA Professional, he is a Class A Member of the PGA of America. He partners with the PGA and the USGA to host Patriot Golf Day on Memorial Day weekend, the Folds of Honor’s largest national golf fundraiser. Patriot Golf Day is the nation’s largest grass roots golf event and has raised over $50 million to benefit Folds of Honor. Lt Col Rooney is the founder oftwo nationally acclaimed golf courses. The Patriot in Owasso is a Robert Trent Jones II design and the home of the Folds of Honor headquarters. In 2020, Rooney partnered with golf icon Jack Nicklaus to design and build American Dunes, Grand Haven, Michigan. American Dunes honors the birthplace of Folds of Honor while providing hope and healing to military veterans.

In 2020, Rooney launched a new series on Fox Nation. He hosts Fly Into The Wind and travels across America flying his own plane to interview athletes and celebrities. The show’s purpose is to provide real- life advice on how to overcome challenges andengineer a resilient spirit. The show is in conjunction with a new book by the same title, Fly Into The Wind, How to Harness Faith and Fearlessness on Your Ascent to Greatness.