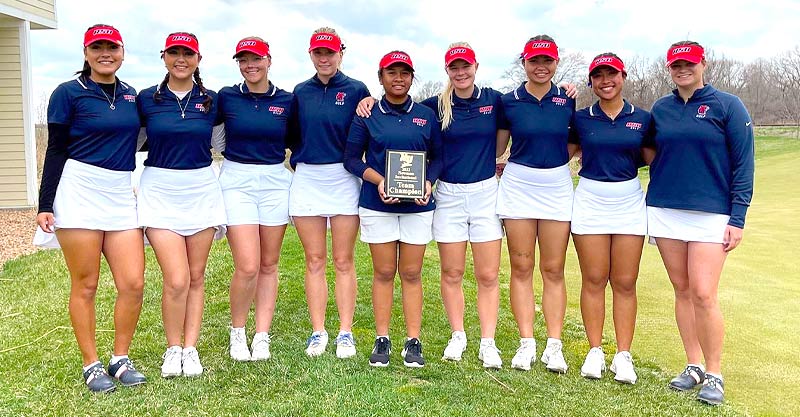 “This was a great final regular season tournament for us,” said coach Whitney Hocutt. “The ladies fought hard for two rounds, and we had multiple step up and play well this week. This is the fourth team win in a row and that is a major success, but now we are focused on winning the next one. Thank you to Newman, Sand Creek Station GC, and their volunteers.”

“Jaelynn played one of her best tournaments this year,” continued Hocutt. “Jess Green stayed calm and put two good rounds together. Lydia came back today and played very well, sinking the final birdie putt on her last hole to secure the team victory. Everyone did so well and I am very proud of them.”

Raquel Flores led the second team in the three-way tie for 13th after shooting 153. Jessica Osden finished in a group of eight tied at 26th with a 156.

With the regular season complete, the Hillcats will now prepare for the MIAA Conference Championships in Newton, Kan. beginning on Thursday, April 21 returning to the Sand Creek Station Golf Course.

Central Oklahoma came lose to pulling out a final-round comeback, but ultimately fell one stroke short. The Bronchos trailed Rogers State by five shots entering the final day and closed with a 298 for a 605 total. Madison O’Dell led UCO on the final day with a 1-over-par 73. Mika Ramos had a closing 74, while Susana Olivares shot 75, Kinsley Hall 76 and Arin Zachary 81.

“We battled hard, but just came up a little short,” head coach Michael Bond said. “I’m proud of the way we played and competed. We gave ourselves a chance and that’s all you can ask.”

O’Dell made three bogeys and two birdies in her one-over round. The junior was three-over with six holes to play before reeling off five straight pars and then finishing her day with a birdie on the par-5 second hole.

It was the final regular-season tournament of the year for the Bronchos. UCO returns to the same course for the MIAA Championships on April 21-23.