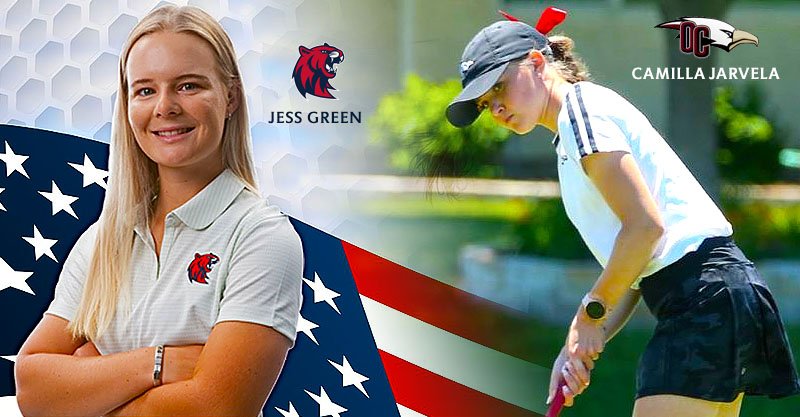 Green was named an honorable mention All-American after a stellar year on the golf course. Green was named the MIAA Golfer of the Year and went on to win the NCAA Central Region Individual Championship by eight shots after shooting a course and school record round of -7 with a 65. Green was later named to the All-Central Region following the performance.

The junior led the Hillcats to their first-ever team appearance at the NCAA D2 Women’s Golf National Championship and finished 29th overall in the event, held at the TPC of Michigan earlier this month.

Green finished in the top 10 in seven of her eight events heading into the national championships with two victories and a runner-up finish. Through the regional championships, Green had a win percentage of over 93 percent against individuals during the 2021 spring season.

Jarvela, from Espoo, Finland, wasn’t able to join the Eagles until January due to the COVID-19 pandemic, but once she arrived, she had a memorable semester of action. She finished in the top 10 in four of the seven tournaments in which she played and in the top 20 in two others.

Her best finish was a runner-up showing in the Division II West Super Regional at Wildhorse Golf Club at Robson Ranch in Denton, Texas, which earned her a berth as an individual in the Division II Championship at TPC Michigan in Detroit. She finished tied for 42nd among 72 players in the national tournament, played last week.

Her freshman scoring average of 75.50 over 18 rounds ranks second in OC history, behind only the program’s first star, four-time All-American Anna Arrese Cortadellas, who had a 74.1 average over 13 rounds in OC’s debut season of women’s golf in 2011-12.

“Camilla is a very focused young lady,” OC coach Greg Lynn said. “Everything she does has a purpose, including the way she approaches practice and play. She has just barely tapped her potential and I am excited to see how far she will go in golf.”

Jarvela is only the fifth OC player to make an All-America list at any level and the first at the Division II level. OC’s most recent All-Americans were in fall 2014, when Arrese Cortadellas, Catherine Odgers and Audrey Meisch all made the National Christian College Athletic Association first-team list.