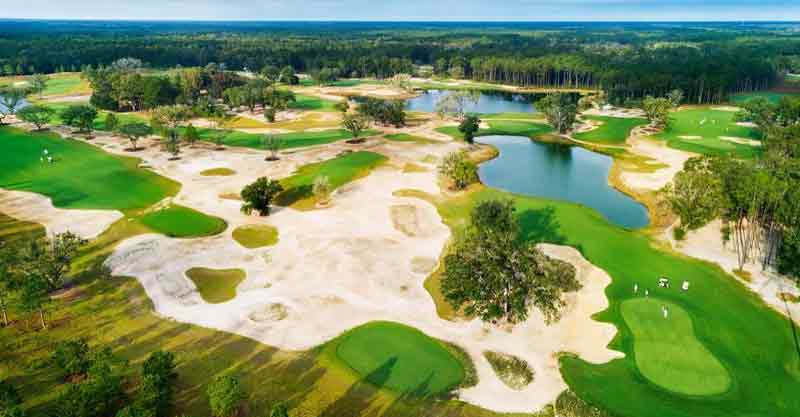 Louisiana’s own Sam Burns made an excellent account of himself at the 2022 CJ Cup in South Carolina. Still, nothing could stop Rory McIlroy from regaining his world No.1 ranking with a successful cup title defense.

Sam Burns made a remarkable comeback in round 4 of the CJ Cup, hitting 13 of 14 fairways and 12 of 18 greens in regulation, avoiding any misses while putting inside 10 feet to finish his day on a positive. Burns spent the day tied in 7th at 11 under.

CJ Cup Round 4: Sam Burns puts himself into T7

Ending with 1 over for the round evolved from Burns’ landing his fifth shot alongside the green followed with a one-putt, resulting in a bogey on the par-5 second.

On the par-4 third hole, Burns arrived on the green in 2 and put a 5-footer for birdie, landing him at even-par for the round.

The fifth hole saw Burns go from 96 yards to 6 feet, giving himself another birdie on the hole. He was 1 under for this round.

With a round score of 2 under concluding the 11th hole antics, Burns shot himself right onto the green in two shots and delivered a spectacular 25-foot putt for birdie.

Hole number 12 saw Burns land into the native area, but his next shot landed on the green resulting in a birdie. This placed Burns to 3 under for the round.

Another belter on the 13th saw Burns go from 73 yards to 12 feet, setting himself up for a bogey. He finished at 2 under for the round.

Two shots on the 15th and Burns followed up with another impressive putt, 13 feet to be exact, giving himself another birdie. He finished with 3 under for this round.

The final notable moment for Burns came on the 17th, following a 182-yard approach shot, he finished with a birdie to complete the round 4 under.

Despite his efforts, Burns couldn’t find himself higher than T7, tied with Lee Hodges, Brandon Todd, and Billy Horschel.

The Northern Irishman successfully defended his CJ Cup title and returned to the No.1 position in the Official World Golf Ranking.

With yet another relocation, CJ Cup went from Las Vegas to Congaree Gold Club in South Carolina this year.

And for a second successive year, Rory McIlroy lifted the trophy.

McIlroy won his 23rd PGA Tour competition while replacing Scottie Scheffler as the world’s No.1 ranked golfer. Notably, he defeated the most challenging field of the fall, which featured 15 of the world’s top 20 players.

Rory McIlroy returns to No.1

Two years after he topped the world rankings, McIlroy reclaimed the coveted position when defending the CJ Cup. And with his current form, it will take a unique talent to remove him from this spot.

“It feels great to go out with the lead, play well and get the win”, he said. “It’s an excellent way to start the new season and continue the way I have been playing.

“It means a lot. I have worked a lot to get back to this place, and I enjoy the game as much as I ever have. The joy has shown over these past twelve months. It feels awesome (to be back at No.1). It is a big achievement, and I am proud of myself.”

In overtaking Scottie Scheffler on the OWGR, McIlroy has now been in the No.1 ranking position on nine occasions during his illustrious career. But a lingering question remains, will his current form stay until the 2023 majors arrive? And if he can rectify the close calls, he encountered on those four grand stages in 2022.

Burns can have another good performance at Mayakoba. Sam Burns will return to the field in Mexico when he arrives for the World Wide Technology Championship, which is hosted inside the El Camaleon Mayakoba Golf Course. BetMGM Louisiana sportsbook odds for the PGA Tour will supplement a variety of tempting odds. If Burns can sharpen his iron to match his recent putting skills, don’t put it beyond the Louisiana native to achieve another significant finish inside the top 10.

Betting odds have yet to be released, and we’re unlikely to witness as many top-ranked players hitting the field in Mexico. For this reason, Burns is great potential after shooting a four-under 67 in the final round of the CJ Cup.

Burns was, however, unconventionally poor with his irons in South Carolina, but his putting skills covered the ground; he took over nine strokes and finished high amongst an elite field. It was a significantly more outstanding performance than what he delivered at Sanderson Farms a few weeks prior, and he’ll enter Mayakoba as the No.12 ranked in the OWGR.

Next Up: World Wide Technology Championship at Mayakoba

The World Wide Technology Championship at Mayakoba returns to the PGA Tour on October 31 and finishes on November 6, 2022.

This historic event was the first PGA TOUR event contested outside of North America. And with a purse of $7.2 million, it’s the largest prize pool of any golf competition in Latin America.