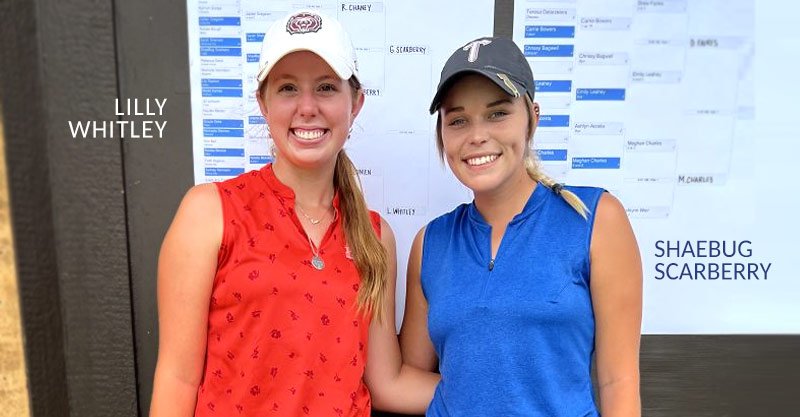 Defending champion Shaebug Scarberry of Tuttle and Lilly Whitley of Edmond advanced to the Women’s Oklahoma Golf Association OGA State Amateur Championship final Thursday morning at Gaillardia Country Club.
Scarberry edged No. 1 qualifier Reagan Chaney of Ardmore 1 up in one semifinal while Whitley held off 15-year-old up-and-comer Natalie Blonien of Altus 2 and 1 in the other semifinal.
Both semifinal matches were tightly contested. Scarberry was 4-under par and three holes up on Chaney through 11 holes, but Chaney holed out from a back bunker on 13 and then won the par-5 14th and par-3 15th to even the match.
Scarberry won the long par-14 16th with a par and both players made par on 17. On the par-5 18th, Scarberry found the creek on the right off of the tee.  Chaney was unable to capitalize on the mistake.  She left her 35 foot birdie putt 10 feet short and was unable to hole the par save to send it to extra holes.
Chaney, an NAIA All-American golfer, will be a sophomore at Oklahoma City University this fall.  Scarberry will be a 5th year Covid senior at Troy for former Tulsa coach Randy Keck.
In the other semifinal, Whitley, a recent Kansas State transfer to Missouri State in Springfield, was 1-under par on the front nine and had a one up lead at the turn.  The golfers tied the next six holes.  Whitley won the 16th to go 2 up and they halved 17 for the 2 and 1 margin for Whitley, an Edmond Memorial High school graduate.
Scarberry reached the semifinals with an 8 and 6 victory over Gracie Doke of Tulsa Wednesday morning. Whitely defeated Madison O’Dell of Owasso 3 and 2. Chaney defeated Sarah Sherrard of Oklahoma City 2 and 1 and Blonien edged Sydney Hermann of Ponca City 1 up.
– Steven Steele