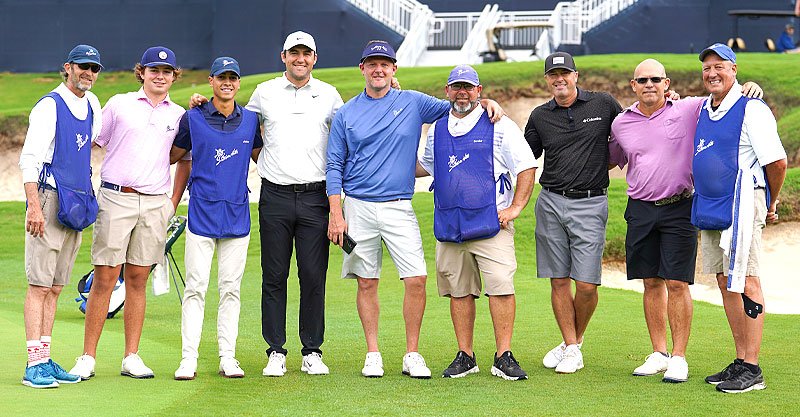 Playing a practice round on a course soaked by over eight inches of rain this week, the world’s No. 1 player tossed out an effortless 6-under 64.  He played the front nine in one under, then after another rain delay ripped off birdies on holes 10, 11, 12, 13, 15 and 17 on the back nine.

“He played one ball the entire time, no practice putts, and made it look easy,” said Chhim, who caddied for Scheffler. Rayn Palmer was also in the group along with a friend of the two.

“He’s No. 1 in the world and it was pretty easy to see why. It would be hard to say that he’s not going to win or at least be in contention. He hits it far enough and he has just incredible distance control with his irons.”

The Master champion and affable Texan will be going for his second consecutive major championship at the PGA Championship May 19-22. He has won four times in his last six events in rocketing up to No. 1 in the Official World Golf Rankings.

Scheffler won the Big 12 Championship there in 2015 and finished in a tie for fifth in 2018. His other experience at Southern Hills was in the rain-shortened Trans-Mississippi Championship in 2014, where he tied for 21st.

But overall Chhim said Scheffler renewed a love affair with Southern Hills, which he has previously called one of his favorite courses in the world.

With the ball not rolling more than a few feet on the saturated turf, Scheffler played the par-5s conservatively. Chhim said on the 632-yard par-5 13th, he hit driver, 3-iron and wedge from 82 yards to 5 feet for a birdie. Most of his birdie putts on the back nine were from close range.

“His proximity on most was 6 to 8 feet,” Chhim said. “The greens weren’t slow, but they were wet. His speed control was good and just took the break out of a lot of them. He looked like he was converting them easily.”

Chhim, who started at Southern Hills as an intern in 2020 and became an assistant professional in 2021, said the days leading up the PGA Championship are exciting, as one never knows who is going to be coming through the doors trying to get an early look at the course that was restored by Gil Hanse and Jim Wagner in 2018.

“We don’t know until we get in the office, but it’s been a lot of fun,” said Chhim, a fine player himself who made the cut in the recent PGA Professional Championship at Omni Barton Creek Resort in Austin.