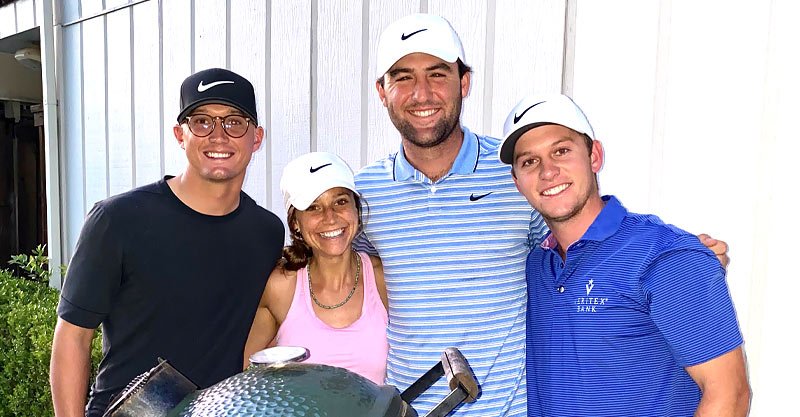 Scottie Scheffler is on one of the hottest streaks in PGA Tour history. Just to recap, in the last six months he went 2-0-1 at the Ryder Cup as a Captain’s pick, won at the Waste Management, again at Bay Hill in the Arnold Palmer Invitational and then prevailed in the WGC Match Play at Austin Country Club, moving to No.1 in the world.

Surely that meant he would freeze at The Masters? No, he went on to win in dominant fashion, with his high, soft irons, fantastic touch on chipping and pitching and solid putting leaving the field in the dust. It capped one of the best streaks of any player not named Tiger Woods.

The Oklahoma pros who lived with Scheffler and played against him on a daily basis while the world struggled through the first Covid shutdown are not surprised. They have seen this before.

In June of 2019, after leaving the University of Texas and starting his pro career on the Korn Ferry Tour, Scheffler moved into a house in Dallas with former Sooners Max McGreevy, Charlie Saxon and Grant Hirschman as well as Drew Ison of Edmond, who played collegiately at Drake and is now a sales consultant at Collective Health.

All four of his roommates come to the same conclusion when asked about Scheffler, stressing he is genuine, down to earth, competitive and capable of a level of play few ever reach. With his love for Southern Hills documented and the previous success he’s had there, winning the Big 12 Championship in 2015 as a Longhorn freshman and finishing tied for fifth in 2018, he would have to be a favorite for the 2022 PGA Championship coming up May 19-22.

“I think as I look back at my time in the house with Scottie, the biggest thing that stands out to me is how much he liked to celebrate others’ successes.” Ison said. “He would have good weeks on the Korn Ferry Tour and he was not the one to come back and boast about it, in fact, you wouldn’t even know how he played unless you looked it up, whether it was winning an event or keeping his card for another year.

“Scottie and Mere (his wife Meredith) always went out of their way to celebrate our birthdays. You could bet that a cookie cake, a gift, and a celebration were always in order on a birthday, which was super thoughtful of them.”

McGreevy, who now plays on the PGA Tour, and Saxon, currently on the Korn Ferry Tour, didn’t know Scheffler when he moved into the house, but McGreey said they quickly bonded.

McGreevy recalls a time the Saxon was struggling with his chipping and Scheffler came to the rescue.

“It was a cold day, so we were all inside, and I remember Scottie giving basically a lesson on bounce and chipping in our living room. He’s 23 at the time,” McGreevy said. “But I am listening to literally every word that he said. Obviously he was trying to help Charlie, but all of us sat in the living room listening because he really was just way more golf smart than all of us. And that is hard to take when it’s someone younger, but he had so much knowledge that we would always run questions by him and he would sit there and answer every single one. I took a lot from that little chipping lesson in our living room. Things I still think about two years later.”

“What is cool about Scottie is that you would never know he’s the No. 1 player in the world,” Saxon said. “It’s not going to change him. All of his various player of the year trophies and trophies from wins were stuffed under a pile of NIKE stuff in his closet. He’s just a humble guy unless he beats you in a money game, and in that case, he’ll make sure you hear about it for the rest of the day.”

And there was plenty for Scheffler to crow about to his Sooner roomies. They saw this Scheffler on a similar heater during the first Covid shutdown.

“Around April of 2020, Scottie had a stretch where in a few week span, he shot 59 twice,” Ison said. “Once at Texas Rangers GC and once at Royal Oaks, and the day before he shot 59 at Royal Oaks, he shot a 60! He made golf look like a video game!

“The day he shot 59 at Rangers he was playing with his group from Royal Oaks and he didn’t even know he shot 59 until they were driving home and counting everything up. He had a bogey on the ninth hole after trying to hit a driver off the deck and topping it into a creek. He said he had to halve all the bets because it got out of hand.”

Saxon says that he knew he was capable of rising to No. 1 after all the golf they played together during the break.

“We all obviously knew he was really good, but during Covid, he went on this run of next level golf for a few months. He took Max and me to the cleaners every time we teed it up.” Saxon said. “I have played with a lot of great players at various stages of their careers and I have never seen someone play as good as Scottie did for those few months.”

“Basically Scottie paid rent for six months out of his Venmo account from taking money from the other guys in our house.” Ison laughed.

Whether golf, spike ball or board games, the competition was on. Saxon says that Scheffler is a “sneaky good athlete” and wanted to win every game of Spike Ball 21-0.

Ison laughs about a time where they were staying up late playing Sequence with the guys, and “with Scottie around, you knew we were playing for money.

“There was one night Scottie was down a large sum and wouldn’t let us stop until he had a chance to get his money back. No matter what we did, or what game we played, Scottie was always super competitive and he hates losing.”

Ison sums Scheffler and their relationship up this way.

“You see all these people saying how humble Scottie and Mere are, it is 100 percent accurate. Scottie is a great man and an even better friend. Makes cheering for him a lot easier even knowing he is a Texas Longhorn.”