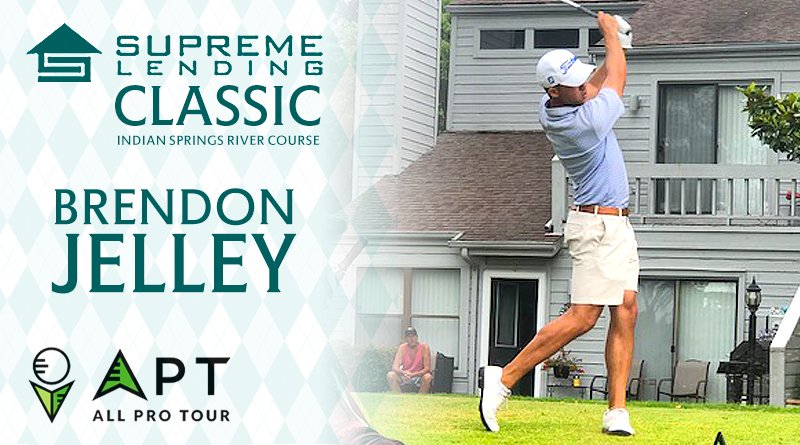 What’s in the water in Oklahoma? First Austin Eckroat shoots a record 61 at exceedingly difficult Oak Tree National. Fellow Oak Tree member Rhein Gibson (of River Oaks 55 fame) sets a new course record at Shangri-La this Saturday with a 12-under 60.

Eclipsing both those incredible scores was Brendon Jelley with a 13-under 59 in last Tuesday’s pro-am for the Supreme Lending Classic on the APT Tour Wednesday through Saturday at The Club at Indian Springs in Broken Arrow.

It was actually the second 59 for the 25-year-old Jelley, the former Jenks and Oklahoma State star now early in his professional career. He accomplished the feat in August of 2017 in a casual round with his father at Cedar Ridge Country Club in Broken Arrow. And yes, Cedar Ridge is also one of the toughest courses in the state.

Playing in a group that included The Club at Indian Springs owner Paul Glover, Jelley had to birdie the last four holes to achieve the magical 59. He missed the green on 17 but chipped in to keep hope alive.

‘They were all as excited or more than I was,” Jelley said. “There was a great reaction when I chipped in on 17. Then we all knew I had to birdie 18. I hit a good drive and had about 50 yards or so, and chipped it to about 3 inches. So there was no stress on the tap-in. It was fun, got to really enjoy it.

“Then I had an early morning tee time then next day so had to regroup. I came out hot and was 4-under through 5 holes, but just kind of tailed off and made a couple of bogeys. Since then I played real solid last three rounds.

The day after shooting the 59 (from the back tees and playing the ball down), Jelley opened the tournament with a 2-under 70, putting himself well behind the pace in what is essentially a birdie sprint. Yet he came roaring back with consecutive rounds of 67 followed by a closing 64 in which his putting had his playing partners shaking their heads in admiration.

Jelley birdied holes 9-13. On the par-5 15th, his second shot hit a tree and bounced into the ravine fronting the green, coming to rest on a downhill slope facing a steeply uphill third shot. His chip stopped 35 feet away in the fringe, and he rammed that in anyway for a birdie to get to 8-under.

His 20-under total tied for eighth, eight shots behind winner Derek Oland at 28-under.

Jelley won for the first time as a professional in an Outlaw Tour event in Arizona in September of 2019 and finished second in a Golden State Golf Tour event  in late April. Despite the lack of opportunity to advance this year due to the Covid-19 pandemic, he is having enough success to remain encouraged for the future.

Jelley, who is engaged to be married this fall, will play in the remaining APT events this summer and a few Monday qualifiers for Korn Ferry Tour events, as well as the Oklahoma Open.

“It’s just hard to find things to play in right now, but I’ll stay busy,” Jelley said. “I feel good about my game. I keep getting better each year. I’ve been playing really well the last six-to-eight months.  I found a couple of keys with my short game and my putting. I’m excited for what’s to come next. I think there’s a lot of potential and hope things can break my way.”

With the Canadian Tour shut down, the APT Tour is loaded with talent for 2020. Playing in the group behind Jelley were former OSU teammates Zach Bauchou and Hayden Wood. Players with PGA Tour (Trey Mullinax) and Korn Ferry Tour status were in the field just looking for a place to keep their game sharp.

“Everyone is just looking for a place to play and that makes these fields just saturated with talent,” Jelley said. “It’s cool, great for us and great for everyone to have the competition.”