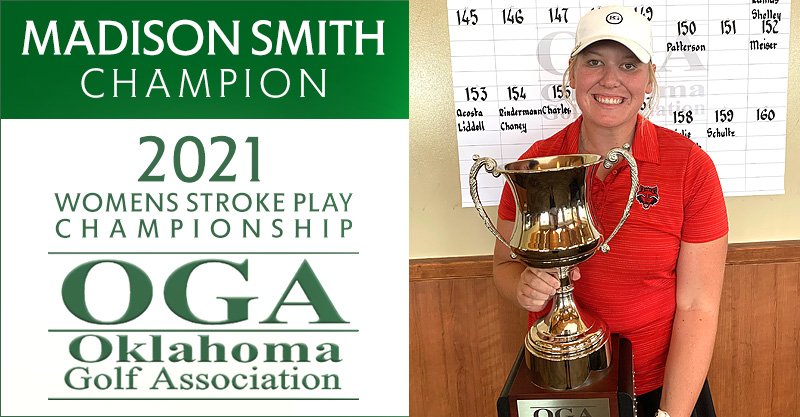 Madison Smith of Moore leaned on her little brother for some good reads in winning the inaugural Oklahoma Golf Association Women’s Stroke Play Championship in a playoff Wednesday on the West Course at Lincoln Park in Oklahoma City.

Smith, entering her senior year at Arkansas State, had 15-year-old brother Mason serving as her caddy for the final round. He gave her a great read on a 15-foot birdie putt on 17 to allow her to get in a playoff with playing partners Emma Shelley of Bartlesville and Maddi Kamas of Ardmore, both of whom also struggled with bogeys on 18 while Smith made a par.

Mason then gave her another terrific read on a downhill 20-foot birdie putt on the par-5 first hole in the playoff, which she knocked in for the title.

“One of my weaknesses is reading greens,” she said. “I trusted his read and it was perfect. I’m so thrilled to have won this first event. The tournament was needed and I really enjoy playing against the other Oklahoma college girls, a lot of whom I’ve played against for a long time.”

Ballstriking was made challenging by 25 mph breezes gusting over 30 mph. Smith said she had to play some shots 3 to 4 clubs different from the yardage, in both directions. But she played a solid round with an even-par 71. Shelley, the first-round leader after a 68, shot 76, while Kamsas shot 72-72.

“It was the breeziest day I’ve played in this year,” said Smith, who has two rods and 22 screws in her back due to childhood scoliosis but has overcome that to play championship level golf. “It was just one of those days where you just tried to stay solid, hit some greens and see what happened.”

Natalie Gough of Bixby placed fourth at 149 after rounds of 75-74 while Josie Patterson of Chandler was fifth at 77-73.

Smith is getting ready to head back to Arkansas State, where she will be a roommate of teammate Olivia Schmidt of Edmond. Kamas is an incoming freshman at Oklahoma City University, which had eight of the nine players on its roster in the field including Gough. Shelley competes for Central Oklahoma while Patterson plays for Oklahoma Baptist. Patterson earlier this summer won the Women’s Oklahoma Golf Association Stroke Play Championship.